In less than a fortnight, the most thrilling football competition in the world returns. There are plenty
of changes afoot for the 2018/19 LaLiga Santander season, with a flurry of activity in the transfer
market, three clubs fresh from promotion from LaLiga 1|2|3, and stadiums better equipped than ever to give fans the most thrilling experience possible.

There have also been two
significant advances on the technology front, with the most up-to-date broadcasting technology now implemented to bring the spectacle to screens around the world, as well as the introduction of VAR.

The first of 38 LaLiga matchdays kicks off on August 17th.

The 2018/19 LaLiga Santander season will of course have three new teams on
board, in the shape of SD Huesca, Rayo Vallecano and R. Valladolid CF. It will be Huesca’s maiden season in the Spanish top flight and the club’s participation in
LaLiga Santander will put the city of just 50,000 inhabitants on the map. While Huesca are new to the elite of Spanish football, Rayo know the division well: they are now set for their seventh stint in the top tier. 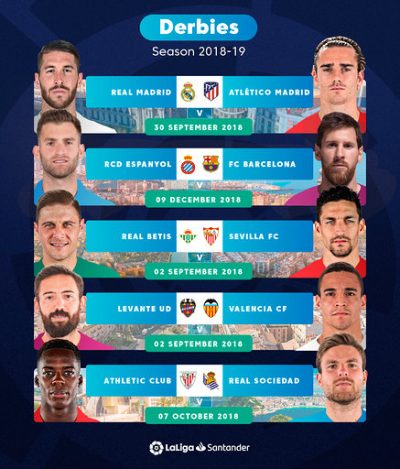 Top-class football will be returning to the Madrid neighbourhood of Vallecas, which gave fantastic backing to their team last season.

Last but not least are R. Valladolid, who are back in the big time after an absence of four years and will be the only LaLiga Santander club flying the flag for the autonomous community of Castilla y Leon. Part of the renowned wine region of Ribera del Duero, Valladolid has common ground with D. Alaves, the Basque clubs and the
aforementioned Huesca in being an important centre for viticulture.

Aside from new clubs, there are plenty of fresh faces whom fans will be keen to watch. Star names from across the globe have joined LaLiga Santander clubs, the most eye-catching transfers being Chile’s Arturo Vidal to FC Barcelona, France’s Thomas Lemar to Atletico Madrid and Peru’s Luis
Advincula to Rayo.

Three other notable names heading to pastures new within Spain are Mexico’s Miguel Layun, who has joined Villarreal CF, Nigeria’s Moses Simon, who has joined Levante, and Japan’s Takashi Inui, who has signed for Real Betis. The transfer window doesn’t close until August 31st, so LaLiga Santander clubs still have plenty of time to add quality to
their ranks.

The LaLiga Santander broadcasts will be of the highest possible standard, with Skycams, the Intel True View system and 4K production set to be a permanent fixture, as all 20 stadiums are now equipped with the requirements for these cutting-edge transmissions.

In addition to the technological advances in broadcasting, VAR will make its debut in Spain following its success at the World Cup. All of this makes for a more exciting, fair and modern footballing experience.

No fewer than 380 nail-biting encounters, heightened emotions every matchday and the agony and ecstasy that await the culmination of the
season are all things that will make the LaLiga Santander 2018/19 season a unique spectacle.