2018 Chamberlain Squash Open Serves Off May 6 In Lagos The second edition of the Chamberlain Squash Open (CSO) will hold from Sunday 6th to 12th 2018, the organizers of the event have informed Completesportnigeria.com.

The 2018 Chamberlain Squash Open will hold at the squash section of the Teslim Balogun Stadium, Lagos.

In a media conference held at the Media Centre of the Teslim Balogun Stadium Lagos, the promoter, Chamberlain Usoh, a season broadcaster with Channels TV stated that the tournament was designed to develop the game of squash in Nigeriafrom the grassroots.

He also revealed that the tournament which has been duly sanctioned by Professional Squash Association (PSA) will see 32 ranked foreign players and 25 players from Nigeria compete for the prize money of $25,000 and $10,000 for men and women categories respectively. 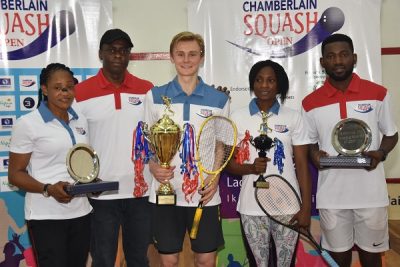 “This Open will help the sports grow because squash was lacking the needed attention with the established players in the sport,” Usoh said in his speech.

“The main objective is to contribute immensely to the development of Squash at the grassroots level and provide a robust platform that will birth and nurture a new generation of players who will proudly hoist the country’s flag on the international sporting area.”

He also showed appreciation to the new sponsors, Century Energy, and Remita.