4 Past UCL Finals Between English And Spanish Clubs Ahead of Saturday’s UEFA Champions League final between current holders Real Madrid and five-time winners Liverpool, Completesportsnigeria.com’s JAMES AGBEREBI takes a look at how English and Spanish clubs have fared against each other in the past encounters in the final …

The 1981 Champions League (known back then as European Cup) final between Liverpool and Real Madrid played at the Parc des Princes, Paris, France, was the first time ever an English club and a Spanish side clashed.

While Liverpool were looking for their third title after triumphing in 1977 and 1978, Madrid were hoping to land their first title since 1966.

At the end of 90 minutes, it was Liverpool who emerged winners thanks to Alan Kennedy’s goal with eight minutes remaining. 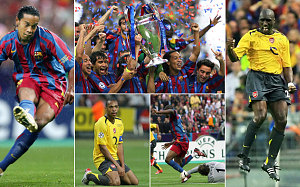 After Liverpool and Real Madrid’s 1981 Champions League final clash, 25 years passed before an English club faced a Spanish opponent again in the final.

Making their first and only appearance so far in the Champions League final in 2006, Arsenal faced Barcelona at Stade de France.

The Gunners took a shock 1-0 lead on 37 minutes through Sol Campbell despite losing Jens Lehmann to a red card early in the first half.

Barcelona equalised in the 76th minute through Samuel Eto’o before Juliano Belletti scored the winner on 80 minutes to give the Calatans a 2-1 win and their second Champions League title. 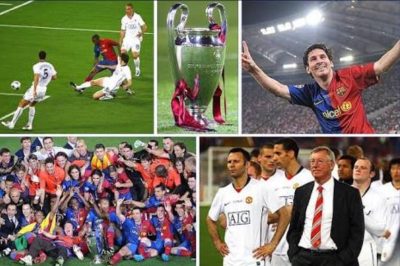 For the third time in a Champions League final, clubs from Spain and England clashed. This time it was Barcelona going up against Manchester United in 2009 at the Stadio Olimpico in Rome.

Barcelona were chasing a treble while United were looking to add the Champions League to the Premier League and League Cup titles they’ve already clinched.

But it was Barcelona that were crowned champions, thanks to a 2-0 win following goals from Samuel Eto’o and Lionel Messi in the 10th and 70th minutes respectively. 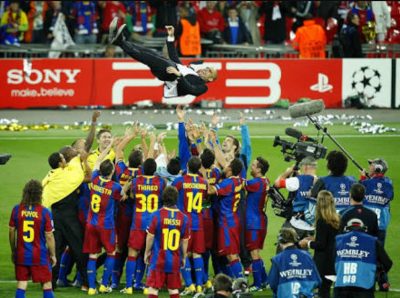 Manchester United had the chance to avenge their 2009 Champions League final loss to Barcelona when both teams clashed again, this time at the Wembley Stadium on England.

Both teams went into the final as league champions from their respective leagues.

But once again, just like in 2009, Barcelona emerged victorious, this time with a 3-1 scoreline.

Pedro Rodriguez shot Barcelona into the lead on 27 minutes before Wayne Rooney made it 1-1 on 34 minutes.