As the Super Eagles of Nigeria and the Three Lions of England get set to faceoff at Wembley Stadium in a pre-World Cup international friendly game on Saturday -June 2, Completesportsnigeria.com’s JAMES AGBEREBI looks at FIVE key battles to watch out for in the course of the game.

Leon Balogun will definitely have his hands full when he comes up against one of the world’s most prolific strikers, Harry Kane.

The Tottenham Hotspur striker had an impressive season last campaign as he scored 41 goals in 48 appearances in all competitions.

Balogun will have to be at his very best because any laxity will be severely punished by Kane who is known for his quickness despite his size, runs from behind and ability to shoot with both feet.

Aside from scoring goals, Kane has also proved that he can be a creator of goals as evident to his five assists for Spurs last season.

This would also be a prelude to what Balogun should expect when the 2018/2019 Premier League following kicks off following his move from Bundesliga side Mainz 05 to Brighton and Hove Albion. 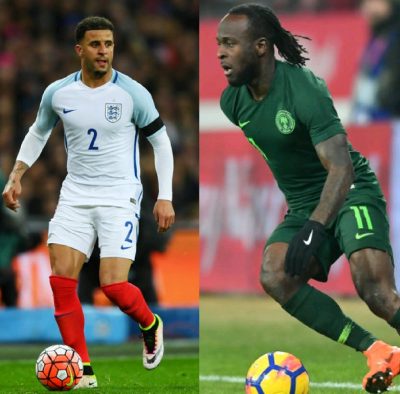 Both Victor Moses and Kyle Walker are no strangers to one another as they have clashed, on numerous occasions in the Premier League.

While Walker was part of a Manchester City side that blew every other side away and were crowned EPL and League Cup champions, Moses helped Chelsea clinch the FA Cup.

This should be an interesting matchup, especially for Walker as he will be coming up against a Moses who is one of the most deadly front players the Super Eagles parade.

At City, Walker has the licence to bomb forward to support the attack due to their domination in terms of ball possession. But with England, it is a different ball game as they
are not known to be a possession-oriented side.

Due to England’s different style of play, Walker would have to be at alert in his defensive duties
as he will be battling against a Moses who is known for direct runs and ability to ghost past his marker. 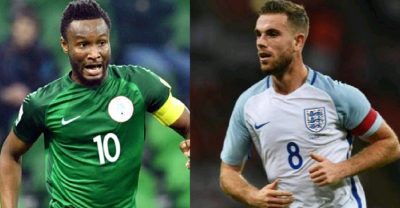 After sitting out the game against Democratic Republic of Congo in Port Harcourt on Monday, John Mikel Obi would be back in action for the Super Eagles against the Three Lions.

Without a doubt, Mikel remains the brain, heart and soul of the current Super Eagles squad and would have to bring all his wealth of experience especially in the midfield area.

On the English side, one player they would be banking on in the middle of the pack is Liverpool’s Jordan Henderson who will go up against a Mikel that will play more on the
offensive for the Super Eagles.

Henderson played a big part in Liverpool’s match to the Champions League final where they lost 3-1 to Real Madrid.

Full of running and hard on the tackles, it remains to be seen how Mikel will fare against Henderson in the battle for the midfield superiority. 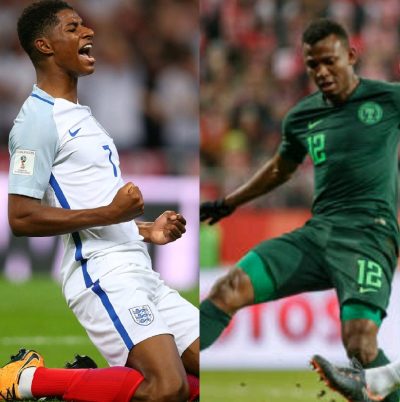 Though not one of his best seasons since breaking into the Manchester United’s first team last two seasons, Marcus Rashford is one player who gives his all when dorning the colours of the Three Lions.

And task of keeping Rashford quiet for the Super Eagles goes to Bursaspor defender, Shehu Abdullahi.

Two of Rashford’s strong points are his pace and dribbling skills which could really trouble Abdullahi if the forward gets in the groove.

Though not the fastest, Abdullahi can make up for this with his ability to read dangerous situations and avert them.

Rashford should also be alert to the defensive side of his game because Abdullahi also has the ability to help Super Eagles in the attack.

Abdullahi’s recent productive attacking foray that easily comes to mind was his assist to Alex Iwobi whose goal secured the 2018 World Cup ticket thanks to a 1-0 win against Zambia in Uyo. 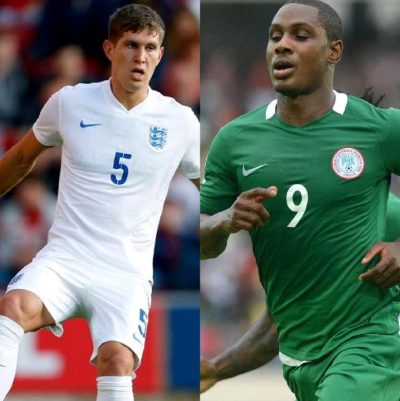 Odion Ighalo would fancy his chances when he go up against Manchester City’s John Stones.

On the back of a Premier League and Carabao Cup triumph, Stones looks to have improved under Pep Guardiola.

Anb improved Stones will battle it out with Ighalo who got the better of him during his debut season with Watford in the 2015/2016 season.

Playing on his debut for Watford, Ighalo was subbed on and he turned Stones then playing for Everton, inside out to put his side 2-1 ahead in the game that eventually ended 2-2.

Under Guardiola, Stones is known to be a well rounded, ball playing central defender. But it would be interesting to see how he would cope against an Ighalo who is known for his raw strength, dribbles and eye for goals.