With the 2018 FIFA World Cup in Russia fast approaching, Completesportsnigeria. com’s ADEBOYE AMOSU recalls seven evergreen moments in Nigeria’s participation at the mundial so far. These memories are bound to wet the appetite of the Super Eagles’ faithful ahead of Russia 2018.

One of the greatest footballers to have played for the Super Eagles, Rasheed Yekini scored Nigeria’s first ever goal in a World Cup game at the 1994 edition in the United States of America. The side coached by Dutchman Clemens Westerhof defeated Bulgaria 3-0 with Daniel Amokachi and Amuneke getting the other goals.

Yekini’s celebration after scoring, crying while holding the goal’s net became one of the iconic images of the tournament. 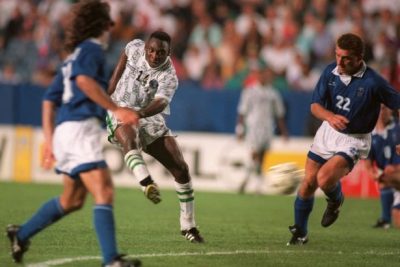 Fast, strong and reliable, Daniel Amokachi scored one of the best goals of the 1994 FIFA World Cup in the United States of America in Nigeria’s last group game against Greece.

Deep into the second half’s stoppage time, Amokachi picked the ball up just outside the edge of the centre circle and proceeded to dink through the Greek defence.

He left four defenders in his wake, shrugging them off with ease before firing an unstoppable effort from the edge of the box.

His thunderbolt rocketed into the top corner passed the hapless Christos Karkamanis and ensured the Super Eagles finished top of the group on goal difference ahead of two-time world champions, Argentina. 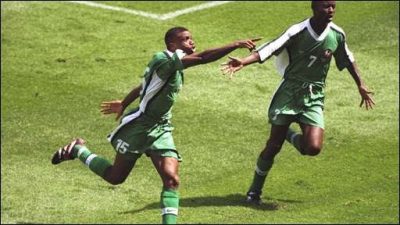 The Super Eagles went into their opening game against Spain at the 1998 FIFA World Cup in France as the underdogs, but shocked one of the pre- tournament favourites, Spain, 3-2 in the end.

For most fans who watched the game, Sunday Oliseh’s superb third goal for the Super Eagles will forever remain evergreen in their memory.

With the scoreline at 2-2, a throw-in in the Spanish half was headed clear by Fernando Hierro, Oliseh ran and fired an explosive shot from 25 yards that took Spanish goalkeeper Andoni Zubizarreta completely by surprise. 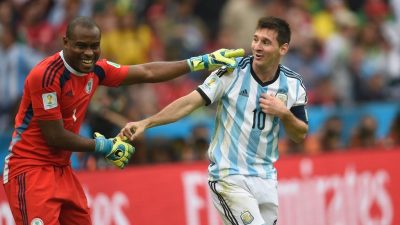 After his debut appearance against England at the 2002 FIFA World Cup co-hosted by Japan and South Korea, Super Eagles goalkeeper, Vincent Enyeama, made his second appearance at the 2010 tournament in South Africa.

Enyeama was named man of the match in Nigeria’s first game of the tournament, a defiant display that restricted Argentina to a 1–0 win.

It was Gabriel Heinze’s header in the sixth minute of the match that beat Enyeama. He made six fine saves against the two-time world champions, four of them from Lionel Messi.

The then Argentina coach Diego Maradona praised him as the reason Messi was not able to score a goal. 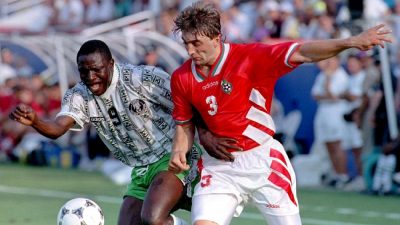 The Super Eagles went to their maiden World Cup in the United States of America as African champions but few would have expected the manner of their dominance in the first game against the Hristo Stoikhov led Bulgarian side which they won 3-0. 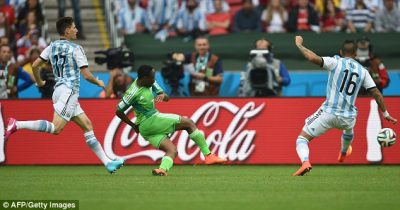 Ahmed Musa two beautiful strikes against Argentina at the 2014 FIFA World Cup in Brazil was one of the biggest talking points of the tournament.

Though the Super Eagles lost the final Group F match 3-2 to Argentina, they still progressed into the Second Round coming second behind the Albiceleste.

Musa twice curled the ball from outside the area with Argentina goalkeeper, Sergio Romero failing to deal with his effort on both occasion. 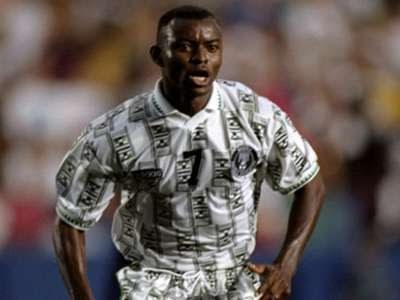 Renowned at that time as the best right winger in Europe following his exploits at Dutch club, Ajax Amsterdam, Finidi George produced a fine finish in Nigeria’s 2-0 win against Greece, in their final group game at the 1994 World Cup in the United States of America.

After receiving a long pass from the back, George lobbed the ball over the advancing goalkeeper and proceeded to mimick a urinating dog in goal ecstatic goal celebration.