Description: A Look at the Prospects of Nigeria’s Two Young Talented Players Alex Iwobi and Kelechi Iheanacho Bringing the Country’s Football Back to the Limelight

The Nigerian football planet has never been a forlorn one. No one could ever say that Nigeria is a disadvantaged country when it comes to football. As much as it may not have maximized its potentials to the fullest, and actualized its utmost possibilities, it has given the world flashes of brilliance. There is hope that with time and proper management the country can still do great things. This is because the talents that will rule the world are not in lack in one of Africa’s biggest footballing powerhouses.

The heroics of Nigerian football seem to come in different eras. The golden era of football in Nigeria ended a few years back with the two biggest names the country has witnessed in the game. Kanu Nwankwo and Austin Jay Jay Okocha gave Nigeria the level of football, international exposure, and trophies no other era has given her.

The superlative performances of Okocha in the CAF AFCON 94 tournament which they won, and his display of skills in USA ‘94 World Cup are still evergreen. The magical display by the duo in Atlanta ‘96 Olympics is still fresh in the minds of many. They were indeed so great that whenever Nigerians find themselves in footballing nations, people referred to them as Kanu and Okocha’s people. While Kanu always capitalized on the big occasions with invaluable impacts, Jay Jay was always mesmerizing the entire fans with his avalanche of skills.

When the duo hanged their boots, flashes of brilliance from John Obi Mikel, Ogenyi Onazi and some of their contemporaries were also witnessed. But while Mikel is a very good player anytime, his era did not have the array of great talents in different departments to bring out the best him. The fact that he was pushed away from his original attacking role to a deep one by Jose Mourinho at Chelsea also did not help matters.

However, talents like Elderson Echiejile, Godfrey Oboabona, Emmanuel Emenike, Ahmed Musa and some others did their best, and were later rewarded with a nations cup in 2013 Luckily, Nigerian football is currently witnessing a very huge revival, thanks to the duo of what seems like the olden day Kanu and Okocha. Kelechi Iheanacho and Alexander Iwobi are two highly talented players at the heart of Nigerian attack that are bringing back the glory days of Nigerian football.

When people sit ruminate on whether the two players can take us back to the days of Kanu and Okocha, they consider the similarities between the two set of players. It was a period when Nigeria was feared in the football world.

However, Iwobi, who was born in Lagos before his parents moved to the UK, is a nephew to Austin Jay Jay Okocha, and they are from the same state in Nigeria. Kelechi on the other angle is a native of the state where Kanu was born and bred, and where he lives and still refers to as his home state.

When it comes to footballing skills and qualities, the similarities become even more striking, while Kelechi Iheanacho is a natural goal scorer like Kanu Nwankwo, Alex Iwobi possesses the skills and craft that his Uncle is known for. With their performances at club sides and country levels, it is not out of place to say that the two have the attention in Nigeria football at the moment.

While Iwobi enjoyed his growth in football in the very developed arsenal academy which he joined right from primary school, Kelechi started the hard way. He wrote about how they would fold their socks to make balls and play on muddy grounds in the ghetto where he grew up in Nigeria. He was unable to raise 50 Nigerian Naira to view the epic final day battle that gave Manchester City their first ever Premier League title at the dying minute in 2012.

However, his heroics at 2013 Under 17 World Cup tournament in the United Arab Emirates, where he struck four times against Mexico in the opening game, drew the attention of the world.
It was also in the same year that Iwobi was listed for the very first time among the first team players for Arsenal in a league match against West Brom. 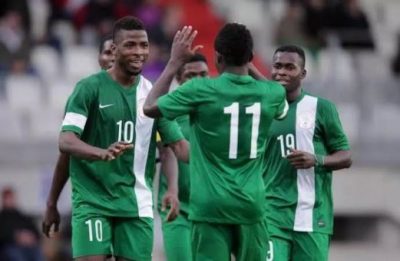 They had their great moments in 2015/16 season when both of them made their debuts in the first teams of their clubs in England. While Iheanacho mesmerized the world with his amazing strike and assist against Manchester United, Iwobi surprisingly rose into Arsenal’s first team, scoring against Everton and Watford in the same year.

Their club fortunes in 2016/17 season were a bit mixed. But they soared in the national side. In the World Cup Qualifying campaign, two of them scored in a 2-1 win against Zambia in an encounter that looked like what the old super eagles are made of. That was an amazing start to the qualifiers for the 2018 tournament in Russia, especially as Cameroun and Algeria drew in the other fixture for their group, check more with online betting offers.

This tells the story of what the two can do for the country in the future when properly used. While Iwobi could not feature in the match against Cameroun on September 1 2017 due to injury, Iheanacho got a goal to his name after coming on as a substitute.

With the likes of Mikel and the underrated Onazi in the center, the talented Victor and Simon Moses at the flanks, Iwobi and Iheanacho can lead the Nigerian attack and produce amazing performances anytime. This is irrespective of the team played against. While Iwobi thrives in those unexpected dribbles and final passes, Iheanacho is so good in positioning, and has the pace, strength, and an eye for goal that is rare in other players.