Every football legend has an intriguing backstory. Some come from relatively stable backgrounds, while others have slogged through the proverbial ‘depths of hell’ to reach stardom. Victor Moses, after witnessing the death of his parents in Nigeria when he was just 11 years old, quite comfortably falls into the latter category. The fact that he first came to Britain as an asylum seeker makes the story of Moses, who is also set to become a regular in the Champions League, even more inspirational. Like his biblical namesake, the lightning winger that today enthrals the Stamford Bridge faithful was very much a lost child at first. However, in 2004, when Moses’ ability on the pitch for local club Cosmos 90 FC began to speak volumes, Crystal Palace came calling.

2009/10 saw Moses become one of Palace’s most potent players in what could have been the club’s final season in business.

A hard-knock start to life

Although Moses would be nothing without his own efforts, much of his recent upturn in personal fortunes can be attributed to the arrival of Antonio Conte at Stamford Bridge in 2016. With Conte’s arrival came a novel 3-4-3 formation which played directly to Moses’ strengths. The preceding nine years would, however, prove to be a real test of Moses’ character. Moses’ promotion to the Crystal Palace senior side, in November 2007, came at a time when the club was about to embark on a sharp short-term decline. Nonetheless, Moses was an increasingly regular ever-present in a side that eventually scored a promotion playoff place. Sadly for Palace, as was reported by BBC Sport, the Eagles lost to Bristol City in the playoff semifinals. Remarkably, it was in 2009/10 – the season that would end with Palace just minutes from relegation and extinction – that Moses chose to be at his most potent.

A purple patch of six goals in eight matches was enough to see Wigan boss Roberto Martinez court Moses. With Crystal Palace desperate to keep their creditors at bay, the deal – as was reported by The Independent – went through without hesitation. A wide man for all occasions, Victor Moses’ versatility across all thirds of the pitch today grants Chelsea the potential to surprise opposing teams when all appears lost. In practice, Moses’ presence on the right flank, with Mikel Alonso on the left, proved one of several key formulae in 2016/17 as the Blues stormed to the title with 93 points. Subsequently, Chelsea are, as of 27 September 2017, priced at just 11/2 by Betway to lift the Premier League title. The current Moses/Alonso combination also gives Chelsea’s typical starting XI the optimal balance it needs to challenge the might of the two Manchester clubs in the (expected) top three. With both his club and country fighting for a very real purpose, Moses’ cannot fail to realise that he could achieve true legendary status in the next twelve months. 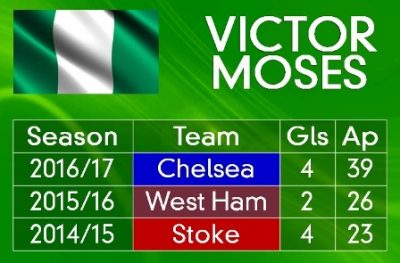 For Victor Moses, the last five years have proved turbulent, but the Nigerian has come through it all and now stands to be a vital fixture in the Nigeria squad for next year’s World Cup.

With Nigeria on the verge of sealing their place at the FIFA World Cup for the sixth time, there is nothing to suggest that the Super Eagles cannot play to Moses’ strengths in the same way Conte does every week in the Premier League. In recent weeks, the most prominent vindication of such an idea can be found in the ruthless way that Nigeria destroyed Cameroon 4-0 in a recent World Cup qualifier. Moses scored the third goal on that occasion, proving a vital bridge between defence and attack. The balance that exists in the Chelsea squad is also mimicked to an extent by the present-day Nigeria squad, with left-sided winger Moses Simon acting as an accomplished foil to Moses in the Super Eagles’ recent brace of qualifiers with Cameroon. After reaching the round of sixteen in 2014, complete with a Victor Moses that had yet to reach full potency, the Nigerians will be under an unusual amount of scrutiny in next summer’s World Cup. Undoubtedly, an improvement on the showing of 2014 will be crucial if the country is to regain the stature it enjoyed in the mid-1990s.