Takam, 36, was defeated by Joshua via technical knockout in round 10 of their world heavyweight title fight in Cardiff, Wales on Saturday night.

The knockout was Joshua’s 20th in his 20th professional boxing career, and means he still remains unbeaten.

Takam has now lost four of his 40 professional fights, winning 35. 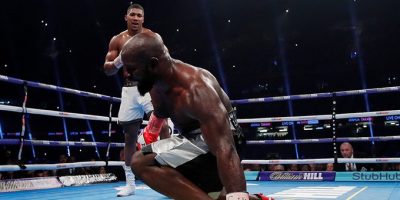 Reacting to his loss, Takam who replaced the injured Kubrev Pulev, expressed sadness that the referee decided to stop the fight in the tenth round.

“No, I don’t think so,” Takam reacts when asked if the referee’s decision to stop the match in the 10th when Joshua swung a flurry of punches on him was fair to him.