Iheanacho Celebrates Leicester’s ‘Back To Winning Ways’ Feat Vs Arsenal Prior to the game against Arsenal, Leicester had gone five straight league games without a win (four defeats, one draw).

It was Leicester’s first league win over Arsenal since 1994.

Iheanacho gave Leicester the lead in the first half before second half strikes from Jamie Vardy (penalty) and Riyad Mahrez, returned the Foxes back to winning ways. 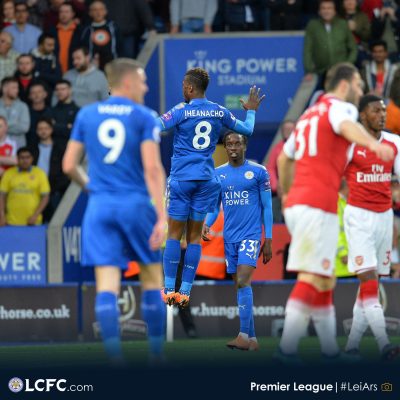 Arsenal’s Kostantinos Mavropanos was sent off after fouling Iheanacho who was clean through on goal.

Reacting to the win, Iheanacho described it as a massive one for his side.

“Great result back to winning ways,” he tweeted on his verified Twitter handle.

The goal against Arsenal was Iheanacho’s second in the current campaign.