Super Eagles defender, Shehu Abdullahi, has praised his Bursaspor teammates despite their 2-1 away defeat to title-chasing Fenerbahce in the Turkish top flight on Sunday, Completesportsnigeria.com reports.

Abdullahi was in action against Fenerbahce but could not prevent a nine-man Bursaspor team from losing 2-1. His compatriots, William Troost-Ekong, and Mikel Agu were unsubstitutes for Bursaspor.

The game was Abdullahi’s 13th in the league this season for Bursaspor.

Furkan Soyalp gave Bursaspor the lead in the 69th minute but an own goal from Senegal’s Moussa Sow drew Fenerbahce level on 71 minutes.

And in the 90th minute, Fernandao scored the winner to secure the important three points for Fenerbahce. 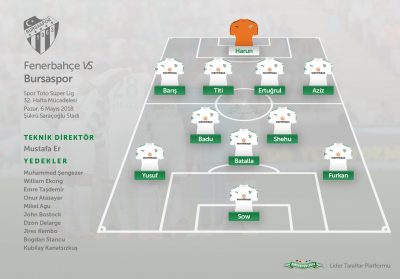 Reacting to the defeat, Abdullahi wrote on his Twitter handle: “Big fight from the team yesterday against Fenerbache.”

Bursaspor are currently 10th in the Turkish Super League table on 39 points, while Fenerbahce are second on 66 points – three points adrift of leaders Galatasaray with two games remaining in the season.