Mutiu Adepoju was a member of the famous Golden Generation Super Eagles that took Nigeria to her first World Cup appearance at USA ’94. Now the Ambassador for the Spanish La Liga in Nigeria,
HEADMASTER says the Spanish football development model is ideal for Nigerian football.
He spoke to TUNDE KOIKI on the Complete Sports Studios radio programme, SPORTS PLANET. Excerpts…
COMPLETE SPORTS STUDIOS: It is a privilege and honour to have former Super Eagles
international, Mutiu Adepoju on our show.
MUTIU ADEPOJU: Yes, it’s my pleasure. But you have not added the “Ambassador of La Liga.”
(Laughter)
I’m Sorry. It’s very important! That’s your new chieftaincy title. (Laughter). Truly, you are an
Ambassador of the Spanish La Liga. Tell us what it entails?
The Spanish La Liga is the best league in the world. I am proud to say it anywhere because I have played in La Liga and I know what it is, how it feels and the passion of the fans. So I’m very happy to be part of La Liga program in Nigeria after my playing career and it is a great honour to be made the ambassador.
Sentiments apart, we all know the impact of La Liga in world football and for them to come to Nigeria to
partner the NPFL is indeed something to be proud of. It’s been two years now and it entails a lot of things which have been done and will still be done to the benefit and development of football in Nigeria.
For those who are probably listening and are too young to know about your sterling football career in Spain, can you please tell us the clubs you played for in La Liga during your playing career?
Firstly, after representing Nigeria at the FIFA U-20 World Cup in Saudi Arabia in 1989, I was signed on
by Real Madrid. I was part of the Castilla team which is the Real Madrid second team where I spent three years…
Did you ever play for the Real Madrid first team all this time?
I played in some friendly games for the Real Madrid first team and did pre-season training with them.
Back then, only three foreigners could play in the first team and they had the best of the foreign players
which made it very difficult for me to break into the main team. 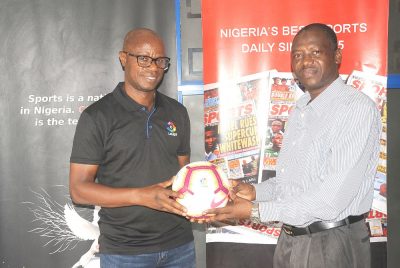