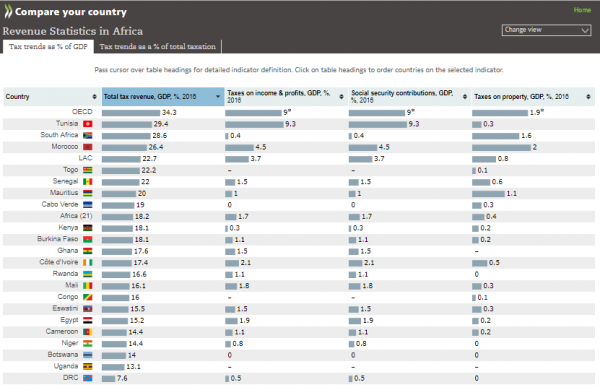 Africa has sustained gains in domestic resource mobilisation made since 2000, as tax revenues remained stable in 2016, according to Revenue Statistics in Africa 2018. Providing internationally comparable data for 21 participating countries, the report finds that the average tax-to-GDP ratio was 18.2% in 2016, the same level as in 2015, which represents a strong improvement from 13.1% in 2000.

The third edition of Revenue Statistics in Africa, released today in Paris during the 18th International Economic Forum on Africa, shows that tax-to-GDP ratios varied widely across African countries, ranging from 7.6% in the Democratic Republic of the Congo to 29.4% in Tunisia in 2016. Six countries -Mauritius, Morocco, Senegal, South Africa, Togo and Tunisia- had tax-to-GDP ratios greater than or equal to 20% in 2016. In comparison, the average tax-to-GDP ratio for Latin America and the Caribbean was 22.7% and 34.3% for OECD countries in 2016.

Revenue Statistics in Africa is a joint initiative between the African Tax Administration Forum (ATAF), the African Union Commission (AUC) and the Organisation for Economic Co-operation and Development (OECD) and its Development Centre, with the support of the European Union.

The publication, which now covers 21 countries, shows that revenue trends are mixed. Between 2015 and 2016, the tax-to-GDP ratios of 11 countries increased while those of 10 countries in the sample decreased. Botswana registered the highest increase (1.3 percentage points) followed by Mali (1.2 percentage points). The largest decreases (of over 2.0 percentage points) occurred in the Democratic Republic of the Congo and Niger. The changes in tax-to-GDP ratios were primarily due to economic factors. Declines in oil prices coupled with lower activity among mining and oil companies contributed to the decreases in the Democratic Republic of the Congo and Niger, while a significant increase in the sale of diamonds in Botswana has increased revenues. In contrast, the increased tax-to-GDP ratio in Mali is partly explained by improvements to tax administration.

African economies continue to rely heavily on taxes on goods and services, which accounted for 54.6% of total tax revenues in the Africa (21) average. Value-added taxes (VAT) alone accounted for 29.3% of revenues. However, the contribution of income taxes is increasing: taxes on income and profits accounted for 34.3% of total revenues across the Africa (21) in 2016 and have contributed the most to growth in tax revenues since 2000, increasing by 2.6% of GDP to reach 6.2% of GDP in 2016. Corporate income tax revenue increased by 1.4 percentage points over this period to 2.8% of GDP, while revenue from personal income tax rose from 2.1% to 3.0% of GDP in 2016, a historic high.

Tax revenues as a percentage of GDP

To access the report, country notes, and summaries, visit: http://oe.cd/revenue-statistics-africa.

Distributed by APO Group on behalf of Organisation for Economic Co-operation and Development (OECD).

Osimhen: Napoli Will Keep Fighting After Win At Sampdoria