Nigerian international Mikel Agu continues to receive rave reviews for his impressive form this season with another GoalPoint Team of the Week nomination despite his team Vitoria Setubal’s 3-1 loss at Portimonense where he got the consolation goal for his team at the weekend, Completesportsnigeria.com reports.

GoalPoint Jornada, the authoritative statistical data website which is highly regarded in Portugal, rated Agu as Setubal’s most influential player in the match played at the Estadio de Portimao.

It is a second nomination this season for the FC Porto loanee who joined the Green and Whites on transfer deadline. 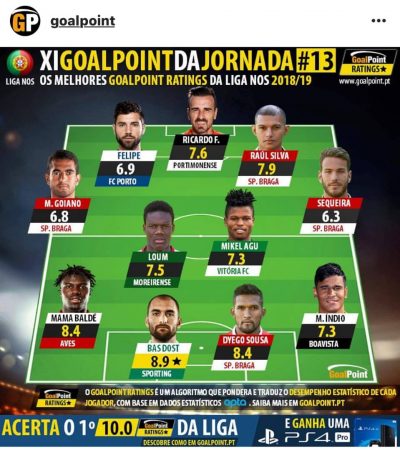 GoalPoint wrote thusly about Agu: “Mikel Agu (Vitória FC) 7.3 – The Sadinos were defeated in their visit to Portimão, but Agu deserved much more of the game.

The midfielder, Agu scored his team’s only goal, had three shots on target, two off-target, and at the back he made eight recoveries of possession, four interceptions and still won the four defensive air duels in which he participated.”

Sporting Braga, 4-0 winners over Fierense had four players on the list while Sporting, Moreirense, Porto, Portimonense, Aves, Sporting and Boavista had one nomination each in the 11-man list.

Agu has been an ever-present in the Vitoria Setubal team and last weekend’s game was his ninth straight start for Lito Vidigal’s team.