By Johnny Edward:
Super Eagles fringe player, Mikel Agu, has reiterated the importance of a Nigerian victory in the Super Eagles’ 2019 AFCON qualifying double header against Libya with the first leg scheduled for the Akwa Ibom International Stadium Uyo on Saturday and the return leg in Tunisia next week Tuesday, Completesportsnigeria.com reports.

The Vitoria Setubal combative midfielder says it will be inconceivable for Nigeria to miss a third straight AFCON finals after the failure to reach the last two editions. 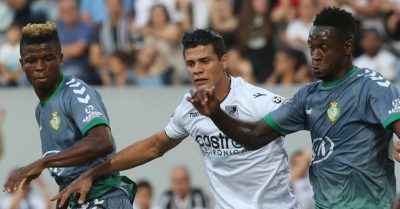 “For a country of Nigeria’s standing and pedigree in international football, it is a shame that we have not been to the AFCON since 2013. So we must ensure that we make it this time around and the best way to do that is to beat Libya who are currently the gtoup,” Agu told Completesportsnigeria.com from his base in Setubal.

The Super Eagles are third in Group E with one point separating them and two top sides four points, Libya and South Africa, a situation Agu reckons can be remedied if the Gernit Rohr’s team gets the better of the North Africans over two legs.

“I think everything is in our hands. If we get a good win in the first leg at home, it will give us good momentum going into the second leg which, fortunately, will be played in a neutral venue in SfaxTunisia.

“So we stand a good chance of nicking at least a draw in Sfax, although we should play for an outright win. If we are able to get a minimum of four points from the two games, we would either be on top or be breathing down the neck of the South Africans.”

The FC Porto player, currently on loan at Vitoria Setubal, also looks forward to a return to the national team after his last minute omission from the squad to the 2018 FIFA World Cup.

“I’m still a part of the team even if I was not called for this particular game. I’m working hard to get back into the team, but you have to pray and support those who are there because if they don’t make it there, won’t be a competition to go and play even if you eventually get the call-up.”

On his club form, Agu is upbeat that everything is going according to plan and happy to have chosen Setubal.

“I’ve said it and I will repeat it. Coming to Setubal was the best decision I made in the summer. I’m working hard and the result is paying off. I’m in the team now and enjoying my football. This can only help my recall to the national team because I intend to keep this form up. Best of luck to Nigeria on Saturday and next week Tuesday too,” Agu concluded.

The Super Eagles last played at the AFCON when they won the 2013 edition in South Africa.