Gabriel Jesus and David Silva were also on target for Manchester City in the win despite Jon Gorenc-Stankovic consolatory strike for Huddersfield Town.

Manchester City made the first attempt on goal in the fourth minute when David Silva’s corner found Jesus but his shot was well saved.

Sliva, Jesus and Benjamin Mendy all missed glaring chances in the opening 20 minutes.

Sergio Aguero however handed Pep Guardiola’s side the lead five minutes before the half hour mark with a delightful lob. 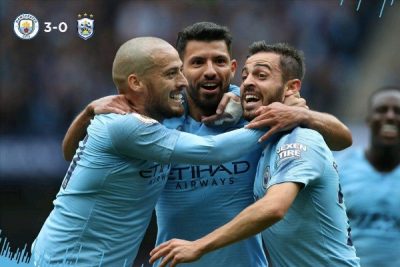 The lead was doubled by Jesus who tucked in Mendy’s pass in the 31st minute.

Aguero made it 3-0 in the 35th minute firing in a rebound after Ben Hamer failed to claim a cross.

Jon Gorenc-Stankovic pulled one back for Huddersfield Town slamming in Steve Mounie header two minutes before half time.

Aguero bagged his hat-trick volleying in Mendy’s pass in the 76th minute.

Five minutes from time, 6-1 an Terence Kongolo scored an own goal after he put the ball past his own goalkeeper.

At Turf Moor, Isaac Success was handed a cameo appearance in Watford’s 3-1 away win against Burnley. 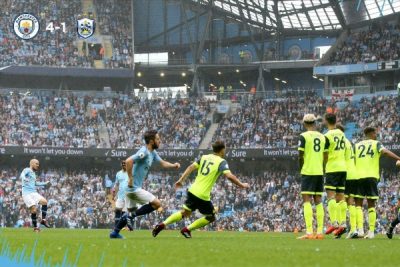 Andre Gray shot the host into the lead in the third minute but parity was restored in sixth minute.

Troy Deeney and Will Hughes secured victory for the Hornets with goals in the 48th and 51st minute.