By Adeboye Amosu:
Enyimba head coach, Paul Aigbogun, says it is important for the club to start their campaign in the group stages of the CAF Confederation Cup against Malian side Djoliba with a win, Completesportsnigeria.com reports.

The People’s Elephant will face the Malians who knocked out another Nigeria Professional Football League club, MFM from the competition in their Group C encounter at the UJ Esuene Stadium, Calabar today (Sunday).

Ivorien club, Williamsville and CARA Brazzaville of Congo will also clash in the other group game on Sunday.

The top two teams in the group will proceed to the quarter-finals.

Djoliba beat MFM 1-0 at the Agege Stadium in their last visit to Nigeria and Aigbogun reckons that it is important they put in their best against their opponent and not put their progress in the competition in jeorpady. 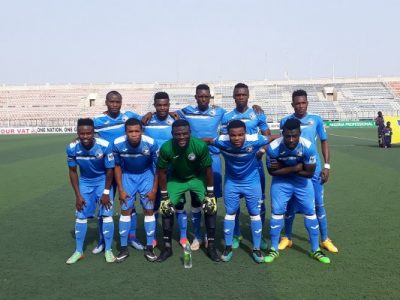 “We have six games in the group stage and we have to make sure we start on a positive note to make things easier for us,” Aigbogun told Completesportsnigeria.com.

“Moreso, this an home game for us and we have to make it count by getting all the three points.

“Djoilba are a good side and they demonstrated that with that victory against MFM, but we are very determined to beat them.

“We have a big target in this competition, but we want to take it one game at a time.”

The Aba side who are playing in the group stage of the CAF Confederation Cup for the first time are looking to become the first Nigerian club to win the competition.