De7fendeing champions Akwa United were knocked out of the Aiteo Federation Cup following a 4-2 penalty shoot-out defeat to Enugu Rangers in their quarter-final tie at the Sani Abacha Stadium, Kano on Wednesday after the game ended 1-1 in regulation time. 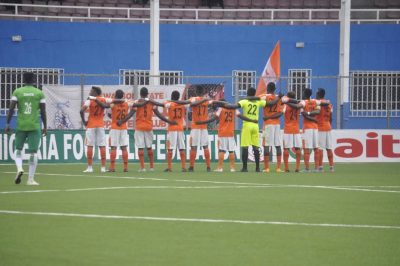 “End of the road!!! After 1-1 regulation time score in quarter final stage, and crashed out in penalty shoot out,” Mbaoma who is on a season loan stint from Remo Stars tweeted.

“How I wish I won this aiteo cup. So far six games, four goals and three assists. Better days ahead. Thank you my fans and followers. God plsz!!! @AkwaUnited_fc @LMCNPFL @AiteoCupNgr.”

Michael Ibe gave Akwa United the lead four minutes before the break from a superb free-kick but Rangers’ captain Okey Odita levelled scores for his side 20 minutes from time to send the game into shootout.