Alaba Reveals He Listens To Davido And Wizkid’s Songs Nigerian born Austrian international,  David Alaba has revealed that he is a fan Nigerian music and listens to it.
The 25 year old player was questioned by a Nigerian journalist, Oma Akatugba in Vienna where he (Alaba) and some of his Austrian teammates came to visit the Super Eagles at their training camp en route the World Cup.
Akatuba revealed in a tweet after asking  the Austrian left- back on his choice of music and his reply implied that he loves to listen to Wizkid and Davido’s songs.

David Olatokunbo Alaba was born in Vienna to the family of George and Gino Alaba. His father is a DJ and rapper in Austria who is a prince from Ogere, Ogun State Nigeria. The father also doubled as his manager, while the mother is from Philippines. 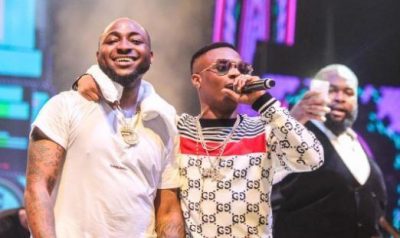 The versatile player that can play in any position but has settled for a left back position in both the Austrian and Bayern Munich teams  has so far made 301 appearances  for Bayern Munich in all competitions, scored 26 goals and provided 23 assists. He is the youngest player to have joined the Austrian National team at the age of 17 and has made 61 appearances.