France joined the elite club of World Cup winners on Sunday defeating Croatia 4-2 in the final of the 2018 FIFA World Cup in Russia at the Luzhniki Stadium in Moscow, Completesportsnigeria.com reports

The Les Bleus who won their first title in 1998 on home soil join the likes of Brazil, Germany, Italy, Argentina and Uruguay as crowned World Champions on more than one occasion.

An own goal from Mario Mandzukic in the 18th minute, a penalty strike from Antoine Griezmann coupled with second half strikes from Paul Pogba in the 59th minutes and another from Kylian Mbappe seven minutes later extended France unbeaten run against Croatia to six games winning four times and drawing twice.

The victory also saw France coach Dider Deschamps become the third man in history to win the World Cup as a player and a head coach after Brazil’s Mario Zagallo (1958, 1962 and 1970) and West Germany’s Franz Beckenbauer (1974 and 1990).

Deschamps was the captain in 1998 and 20 years later he could lift the trophy once more. 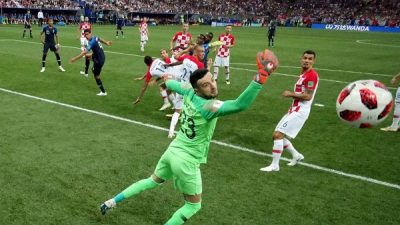 Mandzukic gave France an early lead in the 18th minute courtesy of his owngoal but Ivan Perisic restored parity for Croatia.

Croatia who dominated play from the start of the game were behind again ten minutes later after Antoine Griezmann scored from the spot.

Perisic was judged to have handled the ball in the box following a review from the Video Assistant Referee.

In the second half Croatia continued their possession play but iti was Pogba who made it 3-1 for France firing in his rebound shot from the edge of the box in the 59th minutes and in the 65th minute Kylian Mbappe put the icing on the cake firing a fierce shot past Danijel Subasic.

Hugo Lloris in the 69th minute made an howled allowing Mandzukic to score from close range. 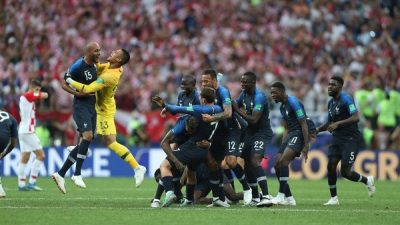