Victor Oladipo of Indiana Pacers (left) with the ball on Wednesday night/Thursday morning.

By Johnny Edward:
D’Tigers star Al-Farouq Aminu made his first National Basketball Association (NBA) start of the season for Portland Trail Blazers on Thursday morning as they recorded a 124-76 blowout of the Phoenix Suns at Moda Center.

Aminu who played for 28 minutes in the encounter ccontributed five points, 12 rebounds and two assists. It was his 521st game in the NBA as the Blazers recorded the biggest first day winning margin ever.

Damian Lillard had 27 points with five rebounds and five assist while Evan Turner scored 12 points. Jusuf Nurkic also scored 11 points, with 11 rebounds and one assist in 23 minutes he featured in.

The Blazers will face Victor Oladipo’s Indiana Pacers on Saturday, who defeated the Brooklyn Nets 140-131 in their first game of the season. 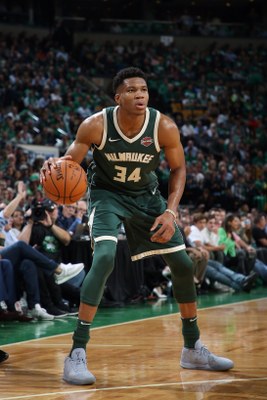 Giannis Antetokounmpo, the Nigerian-born Greek, was the highest scorer with 37 points and 13 rebounds in the Bucks’ triumph. The ‘Greek Freak’ was one one of the stars of the night with his huge contributions providing highlight reels.