Ahead of Tuesday’s all-important Group D clash of the Russia 2018 FIFA World Cup between Nigeria and Argentina , Completesportsnigeria.com’s JAMES AGBEREBI reviews how both teams have fared against each other in past encounters…

Nigeria and Argentina’s first ever encounter was at the USA 1994 World Cup in their second group game.

Going into the game, Nigeria had thrashed Bulgaria 3-0 while Argentina had swept aside Greece 4-0.

But it was Argentina that emerged victorious winning 2-1 following a brace from Claudio Cannigia despite Samson Siasia giving Nigeria the lead.

After their encounter at the 1994 World Cup, Nigeria and Argentina squared off again this time in the group stage of the 1995 Confederation Cup in Saudi Arabia.

Drawn with Nigeria and Argentina in Group B of the 1995 Confederation Cup were Japan.

While Nigeria beat Japan 3-0, Argentina also secured a win against the Asians, trouncing them 5-1.

And in the decider between Nigeria and Argentina, the game ended 0-0 with the South Americans eventually progressing to the final where they lost 2-0 to Denmark.

Nigeria and Argentina were drawn again in the same group at the 2002 World Cup co-hosted by South Korea and Japan.

Also in the group, which was described as the Group of Death, were England and Sweden.

In their first game of the group, Argentina pipped Nigeria 1-0 thanks to a Gabriel Batistuta goal.

Despite the result, both Nigeria and Argentina crashed out in the group stage while England and Sweden progressed to the round of 16.

For the third straight time, Nigeria were drawn in the same World Cup group with Argentina, this time at the 2010 World Cup hosted by South Africa.

Aside from Nigeria and Argentina, Greece and South Korea were also in the group.

And just like at the 1994 and 2002 World Cups, Argentina emerged winners with Gabriel Heinze getting on the score sheet in a 1-0 win.

While Argentina and South Korea advanced to the knockout stage, Nigeria and Greece were eliminated.

Nigeria eventually secured their first win against Argentina which was a friendly game inside the Abuja National Stadium in 2011.

Argentina’s goal was scored by Mauro Boselli from the penalty spot. 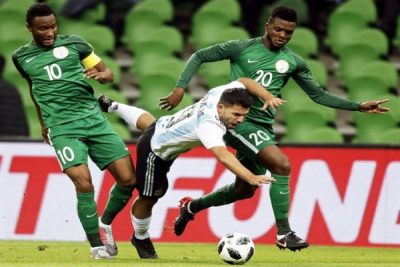 After suffering a humiliating 4-1 defeat to Nigeria, Argentina got their pound of flesh in another friendly that also took place in 2011 this time in Dhaka, Bangladesh.

In their second friendly meeting, Argentina ran out 3-1 with goals from Gonzalo Higuian, Angel Di Maria and an own goal from Elderson Echiejile.

Nigeria’s goal was scored by Chinedu Obasi early in the second which brought the score to 2-1.

Nigeria and Argentina resumed their hostilities at the World Cup as they were drawn together in the same group at the 2014 World Cup held in Brazil.

Once again Argentina were victorious, winning 3-2 with their goals coming from Lionel Messi (brace) and Marcos Rojo while Ahmed Musa got Nigeria’s two goals.

The loss to Argentina did not affect Nigeria’s chances of qualifying for the round of 16 as they alongside Argentina advanced while Iran and debutants Bosnia and Herzegovina crashed out.

The last time both Nigeria and Argentina met was in a friendly game which took place in Russia in 2017.

Argentina raced to a 2-0 lead following goals from Ever Banega and Sergio Aguero.

But Nigeria stormed back to win the game 4-2 with goals coming from Bryan Idowu, Kelechi Iheanacho and Alex Iwobi, who bagged a brace.

Adarabioyo: Fulham Can Get Positive Result At Liverpool