Arteta: Man City Have Best Players In Europe, Will Do Better In UCL Manchester City’s assistant coach, Mikel Arteta, believes the world’s best players are at his disposal ahead of their UEFA Champions League clash against Lyon at the Etihad Stadium on Wednesday.

Arteta who will take charge of Manchester City against Lyon in the absence of Pep Giardiola is relishing the chance to call the shots from the dugout.

The Spaniard replaces Pep Guardiola who is serving a one-match UEFA ban after he was found guilty of misconduct when he berated referee Mateu Lahoz for disallowing Leroy Sane’s legitimate goal at halftime of City’s 2-1 home defeat to Liverpool in last season’s quarter-final.

“For me, we have the best players in the world and I look at our players as if they are the best,” Arteta said during his pre-match press conference on Tuesday. 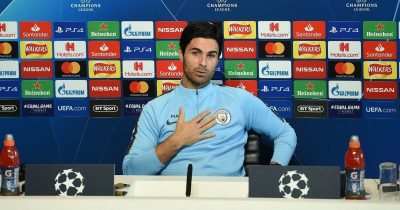 “I wouldn’t change my players for any others. They are absolutely fantastic. The hunger in this group is incredible.”

The former Everton and Arsenal midfielder also admits that Manchester City must triumph in Europe to be regarded as a big team.

“That is the aim. We have a very young squad. They gained a lot of experience in the last two years and we feel we are better prepared,” he said.

“But in the Champions League winning or losing is more detailed. We believe we can do better and tomorrow everything starts. We know how hard it is to play against the teams in Europe.”