Danger was averted on Thursday at the ongoing 2018 Africa Athletics Championship in Asaba, Delta State after an overhead water tank collapsed at the Stephen Keshi Stadium, reports Completesportsnigeria.com.

According to an eye witness account, no casualties was recorded but two cars were badly damaged.

“It was a scary moment here, but we thank God that no life was lost in the incident. Only two car were damaged,” an eye witness told CSN.

“The LOC are working hard to make up for their poor organisation and logistics that almost marred the event.”

Meanwhile, the Chairman of the Local Organizing Committee and former President, Athletics Federation of Nigeria, Solomon Ogba, has accepted the blame for the poor organisation, especially the poor traveling logistics which preceded the championship, but pleaded for understanding.

Several foreign athletes were left stranded at the Muritala Muhammed International Airport in Lagos and had to leave in batches to Asaba the venue of the Championship. 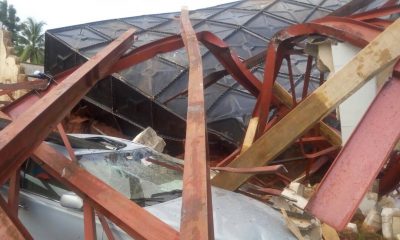 “Today, all the athletes are here and we have adjusted the programmes to accommodate all; no one will be shut out,” Ogba told News Agency of Nigeria.

“Other cities like, Lagos turned down the hosting, so I have to talk to Governor Ifeanyi Okowa to bring the competition to Asaba in order not to deny Nigeria the hosting right.”

Over 1,000 athletes are participating in the five-day event that will end on Sunday, August 5.