Completesportsnigeria.com’s ADEBOYE AMOSU rates Home Eagles players in Monday’s 0-0 draw against the Amavubi of Rwanda…
IKECHUKWU EZENWA 6/10
The Enyimba goalkeeper did not really have much to do in the game but did well on the few occasions he was called into action.
OSAS OKORO 5/10
Was full running all through and provided a good outlet going forward. He will do well to work on his final ball though.
STEPHEN EZE 7/10
Preferred ahead of Timothy Danladi in the starting line-up and did well to justify his  inclusion  in the team. The Kano Pillars centre-back came close to registering a goal late in the game when his header hit the crossbar and had a goal rightly chalked off for offside after the break. 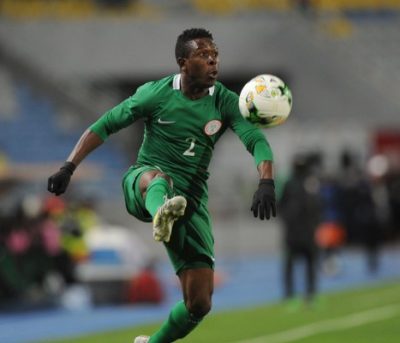 KALU ORJI 6/10
Performed his defensive task dutifully and barely put a foot wrong in the game. Formed a perfect understanding with Eze at the heart of the defence.
DANIEL JAMES 4/10
Not the best performance from the left-back who was caught out of position a couple of times in the game.
EMEKA ATULOMA 5/10
Played in an unfamiliar defensive midfield role and did a good job of shielding the back four.
IFEANYI IFEANYI 4/10
A disappointing performance from the Akwa United midfielder who was no where near his best in the game. He was rightly yanked off for Augustine Oladapo in the 59th minute. 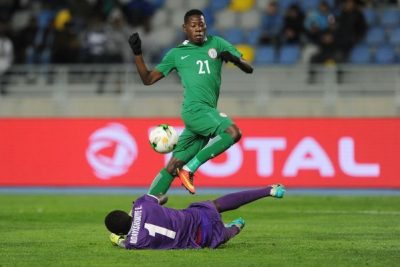 RABIU ALI 5/10
The veteran midfielder struggled to cope with the pace of the game but was surprisingly left on the pitch for the entire duration of the game. His long shot hit the post in the first half.
EMEKA OGBUGH 5/10
Started the game well and provided a superb cross for Sunday Faleye early on whose header hit the upright. He however fizzled out as the game progressed.
SUNDAY FALEYE 6/10
The young forward was Nigeria’s best attacking threat in the game. His superb header in the seventh minute hit the crossbar, while he missed a glorious chance later when he was  one-on-one with the Rwandan goalkeeper.
ANTHONY OKPOTU 4/10
A below par performance from the hitman who was top scorer in the Nigeria Professional Football League last season. He was duly substituted 11 minutes from time.
SUBSTITUTES
AUGUSTINE OLADAPO 4/10
The Enyimba man took the place of Ifeanyi Ifeanyi and offered little following his introduction.
IBRAHIM MUSTAPHA 4/10
Never really threatened the Rwandan defence after he came on for the ineffective Anthony Okpotu
NURA MOHAMMED
Not Rated.
Copyright © 2020 Completesports.com All rights reserved. The information contained in Completesports.com may not be published, broadcast, rewritten, or redistributed without the prior written authority of Completesports.com.