The Super Eagles have been knocked out of the 2018 FIFA World Cup after the first round of matches were concluded. KAYODE OGUNDARE assesses the team in three World Cup games and rates who was hot, who was not and the in-betweens….

Francis Uzoho (Deportivo La Coruña, Spain)
3 Games; 360 minutes
The talk before the FIFA World Cup centred around Uzoho’s lack of international experience. He had just half a dozen senior caps when the competition kicked off but despite conceding four goals in three World Cup games, Uzoho’s stocks have gone a notch higher following a respectable showing in all the matches. He’s no Vincent Enyeama yet but pundits believe that, with his imposing physical size, he can become one of Nigeria’s best goalkeepers yet. Luckily, at just 19 years, he has time on his side. (6) 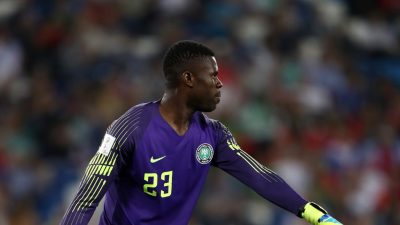 Brian Idowu (Amkar Perm, Russia)
3 Games; 226 minutes; 1YC
Another late entrant into the team who joined after the team had secured the World Cup ticket, Idowu played as a left full-back in the first game against Croatia but was deployed as a wing-back in the last two games when the formation changed to a 3-5-2. Idowu was just marginally better than Elderson Echiejile whose place he took but offered little going forward as a wingback. His performance was stilted and slowed down Nigeria’s attacking fervour from the left side. Copped one yellow card, against Iceland, before he was substituted. (5)

Wilfred Ndidi (Leicester City, England)
3 Games; 360 minutes
A major doubt for the competition after coping an injury for Premier League club Leicester City last April, Ndidi played every single minute of his first World Cup. He shook off a general team lethargic performance in the first game to post impressive showings in the last two games. He was at home in a three-man midfield with captain Obi Mikel and Oghenekaro Etebo and had enough time and heart to venture forward to release couple of palm-stinging shots against the Icelandic and Argentina goalkeepers. Was adjudged to have had more tackles (15) and interceptions (12) than any other player at the end of the group stages of the World Cup. (7)

William Troost-Ekong (Bursaspor, Turkey)
3 Games; 360 minutes; 1YC
One half of Nigeria’s famed Oyinbo Wall, Troost-Ekong drew a lot of flaks after the opening group game loss to Croatia when he wrestled Mario Mandzukic to the ground for a penalty which led to the second goal. He dusted himself up in the next two games but his self-confidence as well as confidence was shaken. He was caught napping a few times and his decision-making was also suspect. Nevertheless, he played with all his heart. (6) 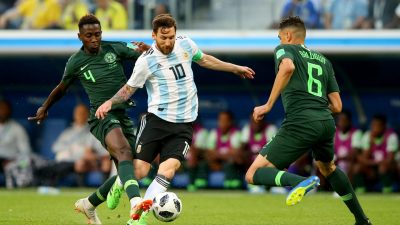 Leon Balogun (Mainz, Germany)
3 Games; 360 minutes; 1YC
Balogun is the other half of Nigeria’s Oyinbo Wall and he truly proved to be a leader at the heart of the defence. The new Brighton of England signing showed his new employers a glimpse of what to expect from him with an assured performance in all three games. In the game against Argentina, Balogun sacrificed himself by lunging at a goal-bound Angel Di Maria which fetched him a yellow card but he stepped up to win a penalty off Javier Mascherano for Nigeria’s only goal of the game. (7)

Ahmed Musa (Leicester City, England)
3 Games; 208 minutes; 2Goals
Easily Nigeria’s player of the tournament, Musa started the competition on the bench but after coming on for Alex Iwobi against Croatia, he never looked back in subsequent games. His speed caused Iceland and Argentina all manner of headaches and his two goals cemented his place in Nigeria’s World Cup history. He’s now the all-time leading World Cup scorer for Nigeria, first Nigerian to score in two different World Cups and the scorer of Nigeria’s last four World Cup goals. Musa rediscovered himself in time and should not be short of suitors if he decides to quit Leicester City this summer. (8.5) 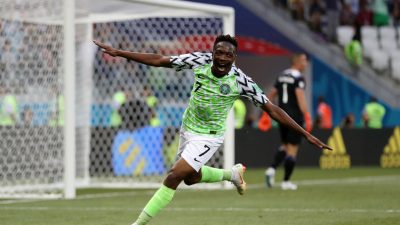 Oghenekaro Etebo (Las Palmas, Spain)
3 Games; 360 minutes
Another unheralded player who stole into the starting lineup basically because Ogenyi Onazi struggled for form while he shone brightly against England in a pre-World Cup friendly. After three games in Russia, Etebo has made himself undroppable from Gernot Rohr’s starting 11 with some energetic performances which helped steady Nigeria’s midfield while occasionally wandering further afield. He was rated as having the best successful take-on dribbles during the group stages, bettering even Lionel Messi. Etebo was one of the Eagles’ stand out players. (8)

Odion Ighalo (Changchun Yatai, China)
3 Games; 122 minutes
China-based Ighalo did his reputation no good as he was easily picked as the scapegoat for Nigeria’s 2-1 loss to Argentina after fluffing two very good opportunities to score. He started against Croatia but was pulled off and was a second half substitute in the other two games. His apology to Nigerians accepting blame for the game summed up his World Cup. (4)

John Obi Mikel (Tianjin TEDA, China)
3 Games; 358 minutes; 1YC
Mikel played all but two minutes of all three games though he came off deep into injury time against Argenttina. A true captain, Mikel led from the front and even played the last game against Argentina with his left hand in a cast. He played in a more withdrawn role in the last two games to accommodate the new formation and was an inspiration to the whole team although he was criticised in the 2-0 loss to Croatia. He bounced back and was a trojan for the Super Eagles in his second appearance at the World Cup. (7.5) 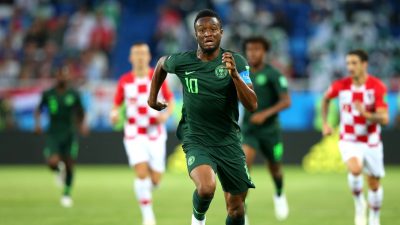 Victor Moses (Chelsea, England)
3 Games; 360 minutes; 1Goal
Cool as cucumber when taking the penalty for Nigeria’s only goal against Argentina, Moses was part of the attacking outlets for the Super Eagles at the World Cup. His breakaway and pin-point cross assisted Ahmed Musa’s first goal against Iceland but he was culpable for Marcos Rojo’s late winner for Argentina when he failed to backtrack in time to cut off the Argentina. Rather than his usual wing position, he was made to play as a wingback in the last two games and he did creditably well, supporting the attack when needed and shoring up the defence too. (7)

Shehu Abdullahi (Bursaspor, Turkey)
1 Game; 90 minutes
Shehu was one of Nigeria’s best players during the qualifying games, even winning the Man of the Match gong in the 1-0 crucial win over Zambia in Uyo but a shocking loss of form and a tweak in tactical formation saw him lose his spot in Russia after the opening game defeat by Croatia where he posted a below-par performance. He never had a second chance to redeem himself as Moses was drafted in to play at wingback, effectively taking his place. (4)

Simeon Nwankwo (Crotone, Italy)
2 Games; 7 minutes
A total of seven minutes from two substitute appearances summed up Simy Nwankwo’s World Cup after he gate-crashed the party during pre-World Cup training camp. He was supposed to be the second striker after Ighalo but apparently Gernot Rohr did not know him well enough to entrust scoring duties to him at the World Cup. Giving the limited appearance, it will be harsh to rate him too lowly. (3) 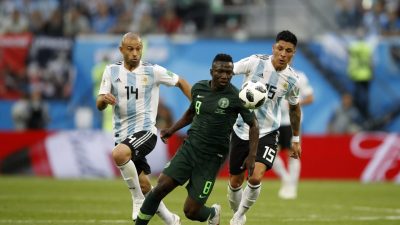 Kelechi Iheanacho (Leicester City, England)
3 Games; 149 minutes
Iheanacho featured in all three games but was a substitute in all. He started on the bench against Croatia, started against both Iceland and Argentina and showed some flashes of brilliance with his hold-up plays and work-rate. His most famous contribution was when he escaped Javier Mascherano’s lunge to the head in the last match against Argentina. Must do much more to get into Gernot Rohr’s good grace again. (4)

Alex Iwobi (Arsenal, England)
3 Games; 70 minutes
Iwobi started brightly against Croatia and was one of the few shining lights in the game. He played for 62 minutes before going off but Gernot Rohr’s decision to change tactical formation cost him his place and he was restricted to two further cameo appearances not lasting more than eight minutes in total. Not enough to see much of the player who had high expectations going to the World Cup. (4)

Tyronne Ebuehi (ADO Den Haag, Netherlands)
1 Game; 45 minutes
The young Ebuehi played only one half of one game after coming in for Brian Idowu but, in that 45 minutes, he showed both sides of his game. He showed courage, for one so young and lanky, as he checkmated the bigger Icelandic players. Towards the end of the game, his naivety showed as he gave up a penalty that could have changed the complexion of the game had Gyfil Sigurdsson converted it. (4.5)

Kenneth Omeruo (Kasımpaşa, Turkey)
2 Games; 180 minutes
After missing the first game, a change of tactics handed Omeruo his first start and he thrived in a three-man defence with Troost-Ekong and Balogun. Played arguably his best game in a Super Eagles shirt against Iceland as he was instrumental in both Nigerian goals. His powerful header out of the box started the move for Musa’s first goal and his long clearance from deep inside the Nigerian half fell in Musa’s path for the second. He was partly responsible for Nigeria being able to deal with crosses from set-pieces as he towered above all in the penalty area. Was however caught out by Lionel Messi for Argentina’s first goal and also partly culpable for Iceland’s penalty. (5.5) 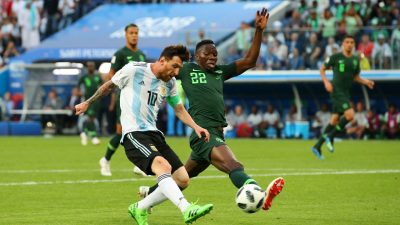