Taiwo Awoniyi is targeting his first league goal for KAA Gent when they face KAS Eupen in the Belgian Pro Division game on Sunday, reports Completesportsnigeria.com.

The youngster has been named in KAA Gent’s 20-man squad for the away match against Eupen which was published on their official website and Social Media platforms early Saturday afternoon.

Awoniyi got off the mark for KAA Gent with a goal in Thursday’s UEFA Europa League win over Jagiellonia Bialystok.

The striker who is on loan from Liverpool, shot his side into the lead in the 13th minute in their 3-1 win, and he is now is forward to scoring regularly for the club in all competitions.

“That was why I was brought in, to score goals,” Awoniyi told CSN.

“The goal was a huge relief and I’m happy it has settled nerves.

“I hope to score in the league this Sunday as well as.” 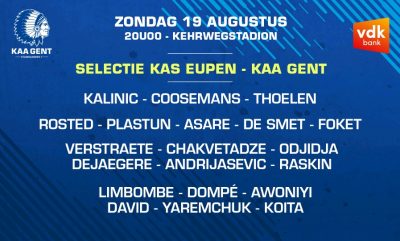 The former Nigeria U-17, U-20 and U-23 striker fired blanks in his first three league games.

KAA Gent will face Bordeaux in the first leg UEFA Europa League playoff tie on August 22 and Awoniyi will look to bag his second goal in three games.