Bafana Bafana coach Stuart Baxter says his team will draw inspiration from their away win against the Super Eagles of Nigeria when they host Burkina Faso on matchday-five of the 2018 FIFA World Cup qualifiers on October 8.

The South Africans stunned the Eagles 2-0 in their first Group E game in the 2019 Africa Cup of Nations qualifiers in Uyo on June 10 2017.

But in their World Cup qualifying Group D, Burkina Faso are on six points, level with Cape Verde. The Burkinabe however lead the group with superior goal difference. Senegal are third on five points, with Bafana Bafana bottom of the table on one point. 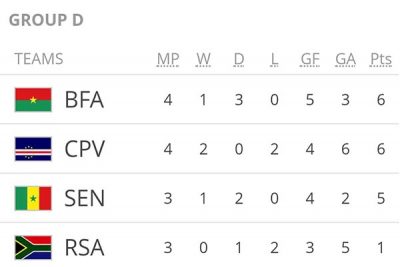 South Africa need to win the remaining three games to stand a realistic chance of qualifying for the 2018FIFA World Cup.

They have been asked to replay their game against Senegal – which they had won 2-1. FIFA said the match had been manipulated by Ghanaian referee Joseph Lamptey.

Baxter said while his side faces a tall order, anything was possible in the game of football.

“After the disappointment of our two games against Cape Verde, the morale is definitely low, but that is our (technical team) duty to lift the boys up. We need to get them firing again, and I know the boys are capable of doing so,” Baxter told safa.net on Wednesday after unveiling his squad for the clash against Burkina Faso.

“It is one area where we will have to work on when camp starts (lifting their confidence levels). Burkina Faso has physically imposing players and we need to counter that with our natural flair and speed. I am confident if we play the way we did against Nigeria, we can come good again.”