Bafana Get Boost As Serero, Mkhize Join Teammates In Training Ahead of Saturday’s 2019 Africa Cup Of Nations qualifier against the Super Eagles of Nigeria, South Africa’s pair of Thulani Serero and Thamsanqa Mkhize joined the rest of the Bafana Bafana squad in training on Tuesday.

Both players did not take part in the team’s first training session on Monday. 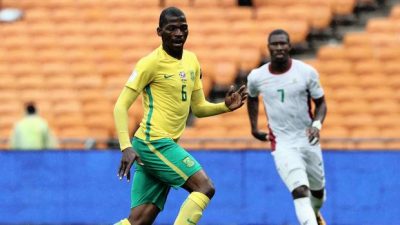 The Bafana Bafana of South Africa continued their preparation for the crucial clash against Nigeria at Steyn City School in Johannesburg Tuesday with no new injury worries.

According to a report on Supersports, the Stuart Baxter’s team trained under the heat wave which is ongoing within the Gauteng Province.

South Africa’s team doctor, Dr Thulani Ngwenya said the camp had started well without any new hiccups but revealed that goalkeeper Ronwen Williams will be monitored for the next 2 days which was the minor setback the team had.

Thulani Serero who arrived in camp on Monday carrying a slight injury, trained on his own but joined the rest of the team on Tuesday just as defender Thamsanqa Mkhize who was also rested having played the entire 90 minutes for Cape Town City in their 3-1 home win over Black Leopards on Sunday.

“Otherwise there are no new injuries and I must say the day began very well,” South Africa’s team doctor, Dr. Ngwenya told Supersport.

Bafana Bafana will face Nigeria on Saturday, 17 November in a crucial Afcon qualifier at FNB Stadium in which a win for either side will seal a berth in the Afcon finals scheduled for Cameroon next year.