Balogun Wants Some More After Historic Feats For Brighton Against Palace Brighton and Hove Albion defender Leon Balogun is eager to impress his manager Chris Hughton when he gets a chance to feature for the Albions in subsequent matches, following his impressive performance in 3-1 win against Crystal Palace, reports Completesportsnigeria.com.

The 30 year old Nigeria international who came off the bench on the half-hour mark in place of Pascal Gross to fire home a spectacular goal to double Albion’s lead on the night with his first touch, admits that the whirlwind evening was a lot to take
in.

Balogun and teammate Andone who was also subbed on in the match created a new EPL record as it was the first time ever that two substitutes scored in the first half of a Premier League match. 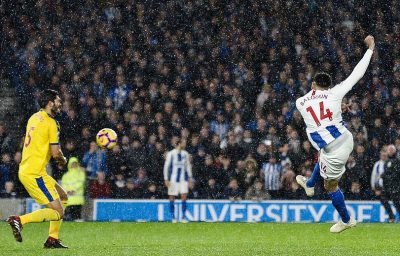 Balogun volleys in his goal off a corner kick

Balogun’s goal was the second quickest by a substitute after Daniel Sturridge’s goal versus West Ham United netted after 24 seconds.

Balogun is set to start at Burnley on Saturday after replacing the red-carded Shane Duffy in Tuesday’s 3-1 derby win over Crystal Palace.

“For me, it’s another dream in this football calendar year that I wanted to come true,” Balogun told the Brighton and Hove Albion official website.

“Now scoring in the Premier League with my first touch in this game, it’s kind of unreal. I’m just happy. When I saw the ball bouncing I knew it was going to be tough, so I just hit it and luckily I hit it right. It was a great feeling.”

“We were one man down, but I think I’m experienced enough to be able to come on and help the team in that situation,” Balogun said.

“Even though I might not be 100% satisfied, I think I still did well and my goal was probably the most important thing about my performance.

“I personally feel that I never really got into the game – viewers might think different, but you always have a personal level that you want to reach, and I don’t know that I really got it. 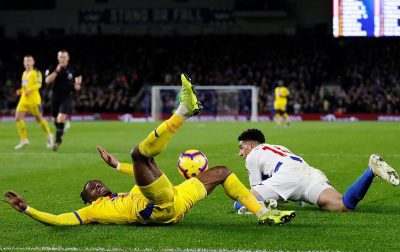 “I’m a bit sad about the penalty, I think it’s a bit of a dark spot on the overall performance of the team. But I’m lucky, I scored a very important goal,” Balogun said.

“My job is to be ready, there is no question about it, and the club knows what I can do.

“I feel a certain trust even when I’m not starting which makes it easy for me to fit into what Lewis Dunk or Shane Duffy have been doing.”

“It’s never easy and you always want to play, but at the same time, you have to be professional about it. You have to be ready for situations and moments and I think I was ready every time I came on – that is important.”

Balogun added: “Every point is important, but the result speaks for itself, it’s massive.”

“If you look back to the game against Leicester where we’ve drawn when there was more we could have got from the game, and the match against Cardiff, tonight the result is huge.”

“I will just take us staying in the league. I’m not going to be specific about it.”

“We have Burnley next, we still have Chelsea, Arsenal, massive games where we are the underdogs and as I said we just see it game by game and every point is important.”

“I think the club knows what I can do. I feel a certain trust, definitely, even though I’m not starting, and that makes it easy for me to fit in and stick to whatever Dunky or Duffy are doing, just fit into the
team.”