Nigeria defender, Leon Balogun, made his first start and featured full time for Brighton & Hove Albion who went down to a 1-0 defeat to Liverpool at the Anfield Stadium on Saturday, reports Completesportsnigeria.com.

Egyptian forward, Mohamed Salah, scored the only goal of the game in the 23rd minute of the encounter.

Salah broke the deadlock with a well placed shot into the far bottom corner following a Robert Firmino’s pass.

The former AS Roma of Italy star has now scored 29 goals in 29 games at the Anfield. 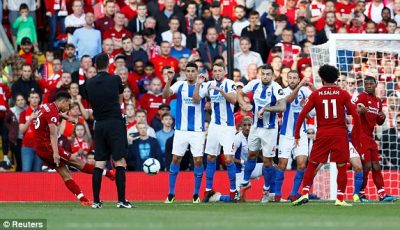 Balogun made his first appearance for Brighton in last Sunday’s 3-2 win against Manchester United coming on as a 20th minute substitute for the injured Lewis Dunk.

The centre-back received a yellow card for a rash tackle on James Milner a minute before the half hour mark.