Balogun Ready For Shirt War At Brighton, Says Competition Will Improve Everyone Balogun, 30, who arrived Brighton on a free transfer following the completion of his contract with German side, FSV Mainz, played his first game for the club since his summer arrival in Tuesday’s 1-1 draw with Charlton Athletic at the Valley.

“It’s always good to have that competition, it will improve all of us as defenders and then we have to take it from there,” Balogun told Brighton & Hove Albion official website.

“The manager will make a decision and we’ll all accept that, but you have to be ready at all times.

“I’ve seen the qualities of Lewis [Dunk] and Shane [Duffy] in the past week or so since I’ve been here – I played with Lewis for the first time this evening [against Charlton Athletic] and he’s very composed on the ball.

“Both are very strong physically and you can tell that they’ve played here for a long time already, but I have qualities myself and I’ll put in my best and see what happens from there.”

The 30-year-old Nigerian reported back to Albion after a summer break representing his country in the 2018 FIFA World Cup in Russia, where he was ever-present for the Super Eagles in the side’s three group matches. 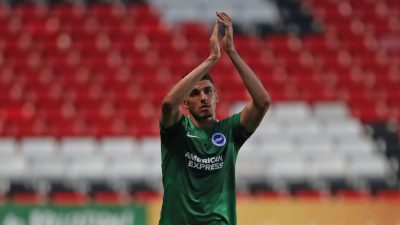 He reflects on the opposition he faced during the tournament, previewed the upcoming challenge during the new Premier League season, and also talked about how his new team-mates fared in the top flight in 2017/18.

“The strikers in the Premier League will have a bit more quality than the World Cup in my opinion, and I think the qualities of the offensive players in the division mean it will be an exciting challenge for me.

“I’ve come into a side where the two central defenders did very well last year – I just have to do my best, work hard and then you hope it’s enough.

“I can’t come in and say I’ve played in the World Cup and I should start – it has to be about me earning a place in the team.”

The Seagulls open their new Premier League campaign away to Watford at Vicarage Road on Saturday 11th August, and with the new season just over a fortnight away, Balogun reflected on his time training with the team so far during the close season.

“I still have to settle in and accustom myself to a new system compared to my former club, but at this level you need to have a certain level of understanding.

“I joined the group three weeks later but it’s just part of my job – it’s a lot more physical here and sometimes it can be quicker too.

“There is more individual quality throughout teams, but I knew that before I came here – the offensive players are strong and skilful but I’m excited to face them when I can.”