Brighton & Hove Albion defender Leon Balogun says he’s relishing his spell at the heart of the Seagulls’ backline, highlighting positives from Sunday’s 2-1 defeat to Chelsea at the Amex Stadium.

The Nigeria international partnered Lewis Dunk for the third top-flight contest in succession against Maurizio Sarri’s men, and he spoke of his satisfaction as part of the current group of Albion faces. 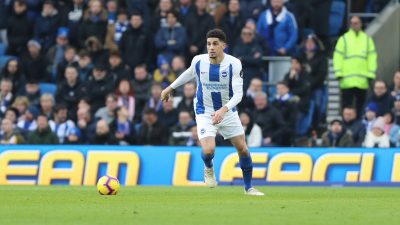 “I’m really enjoying my spell in the side, I had two games with Shane [Duffy] before when Lewis [Dunk] was injured, and it’s always great fun,” Balogun told the club’s official website.

“That goes for being part of this group as a whole, it’s a fantastic squad and dressing room that plays very passionately for one another.

“We pushed a big side all the way on Sunday, and that’s something you have to enjoy – we’ve beaten Manchester United here already this campaign and ran Liverpool close, and those are the challenges you have to relish as a footballer, especially in front of your own fans.”

First-half goals from Pedro and Eden Hazard had given the visitors a two-goal advantage, before Solly March pulled a goal back for the home side, Balogun reflects honestly on the afternoon.

Iwobi Blames Lack Of Concentration For Arsenal’s Defeat To Southampton

“We could have easily got something from the game – we feel like we’ve given them two early Christmas presents,” he said.

“It’s a poor pass from me for the second, but we reacted to that after the break and did very well in the second half.

“I think we gave them a really hard time, and that’s why the disappointment is there for us.”