Head coach of Banyana Banyana, Desiree Ellis, has announced a squad of 21 players to represent South Africa at the 2018 Women’s Africa Cup of Nations tournament scheduled for Ghana from 17 November to 1 December.

The premier African Women’s football showpiece will be used as a 2019 FIFA Women World Cup qualifiers – the top three nations in Ghana will represent the continent at the World Cup finals in France in June.

The squad also comprises a lot of experienced players as most of the squad members have taken part in the Women’s Afcon tournament before. 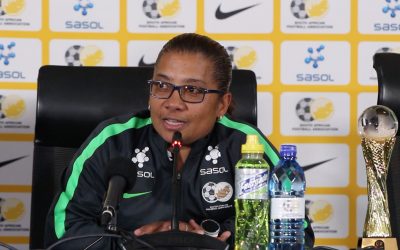 “It was a difficult task to pin down the final 21 players as they all raised their hands to show how much they want to be part of this magnificent team. But I am confident that the players we have chosen will do the business for South Africa,” Ellis told Safa.net.

“Too many times we have close to winning the tournament and I think with the preparations we have had, we feel ready for the competition.”

The quartet will travel with the squad to Ghana and return to South Africa after the international friendly match that will be played in Accra on Sunday, 11 November.

Banyana Banyana have been drawn in Group B to face defending champions Nigeria, Kenya and Zambia.

South Africa will open their account with a clash against the Super Falcons on 18 November, followed by an encounter against Kenya three days later (21 November). Both matches will be played at Cape Coast.

For the final match of Group B, Ellis and her charges will travel to the capital Accra to face Zambia on November 24.

South Africa will be making their 12th appearance at the tournament.

The squad has been in camp since Sunday, 21 October, and will travel to Ghana on Friday, 9 November.