Barcelona are on the hunt for their first three away points of the 2018/19 LaLiga Santander season tonight (Saturday), incidentally at newly promoted Real Valladolid whose home ground, Estadio Nuevo Jose Zorrilla, they dread for obvious reason, according to Marca.

The champions, who have the longest unbeaten run in the history of the league, now turn their attention to a side with plenty of history, who are now back in the top flight.

Barcelona want to build on their opening day victory over Alaves while Valladolid, who achieved promotion against the odds thanks to a fine end to the season, go into the game with little to lose.

Sergio Gonzalez is expected to continue the same formation as against Girona while he has included new signings Enes Unal and Duje Cop, with the latter set to go straight into the team.

Barcelona manager, Ernesto Valverde, has decided to leave out Alcacer, Vermaelen and Rafinha for technical reasons while Cillessen, Alena, Denis Suarez and Samper are injured.

The pitch will be looked at closely at the Nuevo Jose Zorrilla and Barcelona have not forgotten their complaints last time they played in Valladolid over the long, dry grass as they crashed to defeat. 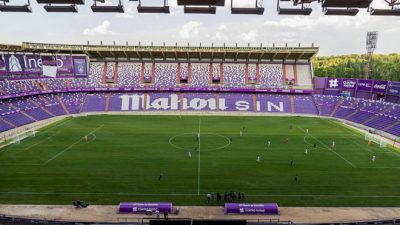 “The pitch was not in the right condition, it was poor and did not help us,” said Xavi afterwards.

This time there is no Xavi and it is also unlikely that Valladolid are looking to create a trap with long grass that has not been watered.

The problem though is that the grass has been recently laid and needs more time for it to be in optimum condition.

“I am more worried about the opposition, but I will not deny that I am also thinking about this,” said Valverde.

“It is not normal to play a game and put the grass down four days before, I don’t know whose idea it was. The pitch won’t have grip, players fall but lets not think about the worse scenario.”