Belgium released their 28-man provisional squad for the Russia 2018 World Cup on Monday with the exclusion of Roma midfielder Radja Nainggolan the big talking point.

The squad was announced via the national team Twitter handle but coach Roberto Martinez explained later that the 30-year-old was left out for tactical reasons.

Martinez said earlier this year on Nainggolan: “We have until May to analyse and make judgments on each player who helped us qualify, plus those who can help us in Russia.

“Nainggolan belongs to that second group of players. We’ll select 23 players and this will be based on the needs of the team.”

The squad is dominated by players from the English Premier League like Christian Benteke, Kevin De Bruyne, Eden Hazard, Romelu Lukaku, Toby Alderweild and Marouane Fellaini.
There is also a place in the squad for former Manchester United forward Adnan Januzaj, who is now at Real Sociedad in Spain.

Belgium are in the same World Cup group with England, Tunisia and Panama. 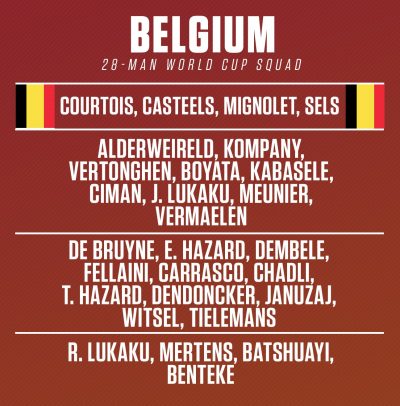