The 2006 FIFA World Cup final in Germany witnessed one of the weirdest headbutts in the history of football. France captain at that time, Zinedine Zidane, headbutted Marco Materazzi’s chest after the Italian defender “used stupid words” to rile Zidane.

The act earned Zidane a red card which caused the French star to end his playing career at international level on an unpalatable note.

At the 1990 FIFA World Cup in Italy, in the quarter-final match involving West Germany and the Netherlands, Frank Rijkaard was cautioned for a tackle on Rudi Voeller.  Just over a minute later, the pair got into another confrontation and after the scuffle, both of them were sent off by the Argentine referee, Juan Carlos Loustau.

Rijkaard spat at Voeller as he walked past the Germany striker.

Five months later, according to a report from the Guardian, Rijkaard apologised to Voller when they met again during a Serie A game where AC Milan played AS Roma. The Dutch legend said he had lost his head, explaining he had been under emotional pressure, having separated from his wife shortly before the World Cup. That act earned Frank Rijkaard the nickname “Llama” by the German media. 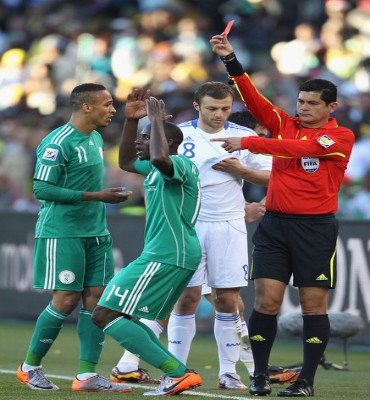 Nigeria midfielder Sani Kaita was sent off for reacting with a silly karate kick to Vasileios Torosidis hitting him with the ball at the 2010 FIFA World Cup in South Africa. The Super Eagles of Nigeria were leading the game by a goal but after the setback they conceded two goals to put their qualification for the knockout stage in jeopardy.

Kaita admitted after the game that the referee was right to issue him a red card. He also revealed after the match that he received several death threats. 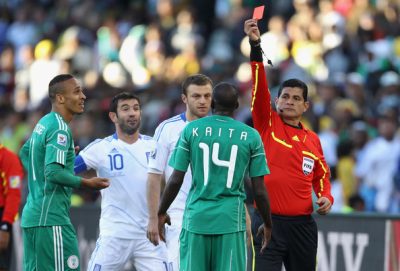 One of the most controversial referee decisions was witnessed at the 2006 FIFA World Cup in Germany. English referee Graham Poll mistakenly issued three yellow cards to Croatian Josip Šimunić before finally sending him off in the Group F game with Australia,  which was to decide which team would finish in the runners-up place. The game ended 2-2. With Australia needing a point, Harry Kewell’s late strike sent them through to the second round. Due to that howler, Poll was one of the 14 referees who were sent home from the World Cup.

At France 1998 World Cup, South Africa defender Pierre Issa, individually, scored two own goals in the Bafana Bafana’s 3-0 defeat to France . France took the lead through Christophe Dugarry and then Issa gave his gracious hosts a wonderful gift by diverting a harmless effort past his own goalkeeper for 2-0. He also diverted in Thierry Henry’s goal-bound strike to make it 3-0 for the French side.

Ghana’s squad to the 2014 World Cup was blighted by the row over unpaid appearance fees owed the Black Stars players. The players missed training on the eve of their final Group G match against Portugal because of the row over fees

Cash-strapped Ghana Football Association sent a plane carrying more than $3 million in cash to Brazil to pay the World Cup appearance fees owed the Black Stars. Kwesi Appiah,  Ghana coach to the World Cup, also defended his players who demanded cash, claiming that many of his squad did not have bank accounts in Ghana.

Midfielders Kevin-Prince Boateng and Sulley Muntari were kicked out of the squad after they clashed with coach Appiah and a Ghana Football Association (GFA) official.

At the 2006 World Cup finals in Germany, Wayne Rooney was the villain for the Three Lions after he was shown a straight red card for a stamp on Ricardo Carvalho of Portugal. 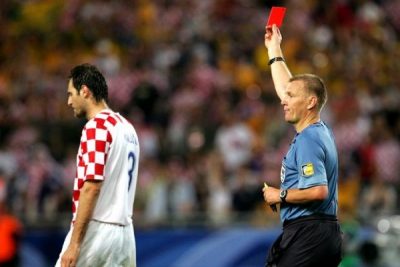 Cristiano Ronaldo appeared to have demanded that actions be taken against his Manchester United teammate by referee Horacio Marcelo Elizondo. Ronaldo was caught on camera winking towards the Portugal bench shortly after Rooney had been dismissed. The English press afterwards descended on Ronaldo.

Frank Lampard’s disallowed goal against Germany at the 2010 World Cup in South Africa helped convince FIFA to introduce goal-line technology. Lampard looked to have equalised when his long-range effort rebounded off the bar and went well over the line – only for referee Jorge Larrionda to disallow the strike. England ended up losing 4-1

Uruguayan striker Luis Suarez handled the ball to prevent a last minute Ghana goal in a quarter-final match at the 2010 FIFA World Cup.

Suarez was shown a red card and the penalty kick, which would have sent Ghana to a historic semi-final, was missed by Asamoah Gyan. Ghana subsequently lost the match 4–2 in the penalty shootout. After the game, Suarez was unapologetic about his handball, stating that he made the “best save of the tournament” and claiming that “The ‘Hand of God’ now belonged to him,” a reference to the handball goal scored by Diego Maradona in the 1986 World Cup.

After controversially winning their play-off clash with Ireland, the French team to the 2010 FIFA World Cup in South Africa were in total disarray and chaos. This followed a highly disappointing UEFA Euro 2008 first round exit. Nicolas Anelka was sent home for his outburst at coach Raymond Domenech as the team lost to Mexico. The captain of the team, Patrice Evra, was also involved in a heated argument with trainer Robert Duverne.