By Nurudeen Obalola (photos by Ganiyu Yusuf) in Uyo:

Rampant Super Eagles of Nigeria on Saturday evening flew into 2018 FIFA World in Russia with a hard-fought 1-0 win over a resilient Chipolopolo of Zambia at the Nest of Champions the, Godswill Akpabio International Stadium Uyo.

Arsenal youngster, Alex Iwobi came off the substitute bench to score the back breaker in the 73rd minute against the bemused Zambians.

Nigeria have bagged their sixth World appearance in style, amassing an unassailable 13 points in Group which effectively reduces matchday-six games in November to mere formalities.

In the group’s other game, Cameroon beat Algeria 2-0 to maintain their third position on six point. 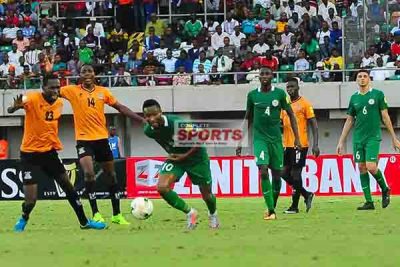 Zambia had the game’s first attempt on goal in the 15th minute through Fashion Sakala following a poor pass but he hit his shot wide.

Odion Ighalo had the Eagles first chance on 16 minutes but failed to connect with Moses Simon’s low cross.

Zambia thought they had scored on 24 minutes through Augustine Mulenga only for his effort to be ruled for offside.

The Eagles were forced to an early change on 30 minutes as Ogenyi Onazi went off injured and was replaced by Mikel Agu.

In the 31st minute Simon hit a low left foot shot from the edge of the box but Kennedy Mweene went down to make a good save.

A minute later Enock Mwepu had a chance to put Zambia ahead off a knock down only to hit his effort over the bar with Ikechukwu Ezenwa to beat.

Alex Ngonga hit a low left foot strike from range which Ezenwa palmed against the post for a corner.

Ighalo should have put Nigeria ahead on 44 minutes but blasted his shot over the bar after good play from Victor Moses.

On the stroke of halftime Simon attempted a bicycle kick inside the box which went over.

In the 53rd minute Mwepu went close for Zambia but his shot failed to beat Ezenwa.

Mweene made a superb save palming Wilfred Ndidi’s header from Moses’ setpiece.

In the 67th minute a dangerous by the Zambians took a slight deflection and went away for a corner.

Ighalo was presented with a big chance on 71 minutes but delayed too much on the ball.

The Eagles eventually broke the deadlock on 73 minutes as Iwobi lashed on to Shehu Abdullahi’s cut back to put Nigeria 1-0 up.

A few minutes later Iwobi sent in a good cross but Ighalo failed to connect.

In the 85th minute Moses had the chance to double Nigeria’s lead but blasted his effort over the bar from the edge.

In the 90th minute Moses had a chance to wrap the game up but missed Aina’s low cross.