– FUTURE IS BRIGHT FOR THE SUPER EAGLES

The expectations on the Super Eagles going into the World Cup was very huge. Following the kind of preparations the team had, there was the belief they would surely make it out of their group.

But things did not turn out as expected as they could not go past the first round, no thanks to the heartbreaking defeat to Argentina in their final group game.

Having said that, the Super Eagles were not disgraced as they showed they could mix it up with the best which shows the future of the team is very bright.

With players like Francis Uzoho, Leon Balogun, William Troost-Ekong, Oghenekaro Etebo, Alex Iwobi, Wilfred Ndidi, and Tyronne Ebuehi all making their World Cup debuts and also impressing, it means this bunch will be a handful especially when the 2019 Africa Cup of Nations qualifiers resume. 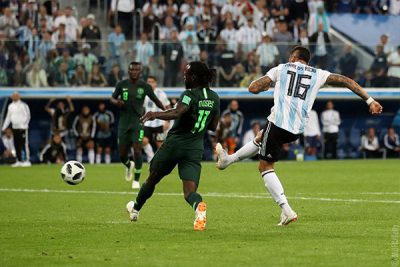 Though the Super Eagles failed to progress from the group stage, it is imperative that Gernot Rohr continue his role as head coach.

It is evident that since Rohr’s appointment, there is this family bond among the players. Right from the qualifiers up until their last game at the World Cup against Argentina, it is clear for all to see that there is unity and oneness among the players that even in defeat, they are still together.

It would be an unwise decision to allow Rohr leave now because it would mean the new coach would have to start all over again, which will take the team back to square one.

– MIKEL OBI IS STILL KEY TO THE SUPER EAGLES

Another important figure in the Super Eagles that still has a role to play is the captain Mikel Obi.

Since taking over as captain of the team, Mikel has exhibited his leadership qualities which have rubbed off positively on the team.

Since it is a young team, it is important Mikel still sticks around to guide them especially now that the 2019 AFCON qualifiers are just around the corner.

He might not play regularly, but bbeing on the bench and offering advice would go a long way in helping the team grow. 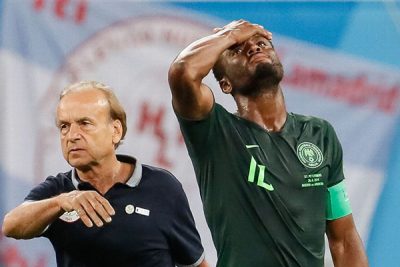 – IT SHOULD BE CURTAINS FOR SOME PLAYERS IN THE SUPER EAGLES

The 2018 FIFA World Cup made it crystal clear that some players have no business in the Super Eagles anymore.

Players like Odion Ighalo, Elderson Echiejile and Ogenyi Onazi should say their byes from the team as it is glaring now they are over the hill.

Aside from Ighalo who played in all the group stage games and did not impress, the duo of Echiejile and Onazi were not even considered for selection.

The fact that Rohr decided to switch to inexperienced players like Etebo, Ebuehi and Bryan Idowu at critical times when he could have turned to these experience heads is an indication their days in the team are numbered and they should do the honourable thing and retire from international football.

Currently the Super Eagles’ position in their 2019 AFCON qualifying group does not look pretty, there should be a turnaround when the race for Cameroon kicks off.

With the experience garnered at the World Cup, it will be difficult to stop the Super Eagles from picking one of the two tickets from their qualifying group for the 2019 AFCON.

With due respect to South Africa, Seychelles and Libya who are in the Super Eagles AFCON qualifying group, they do not come close to the likes of Croatia, Argentina and Iceland.