Enyimba made a winning return to their home ground in Aba , following a hard fought 1-0 win against Congo’s CARA Brazzaville in their CAF Confederation Cup matchday-six Group C clash at the Enyimba International Stadium Aba on Wednesday, reports Completesportsnigeria.com reports.

The hard-earned victory also saw the Aba giants book a place in the quarter-final stage of the competition. 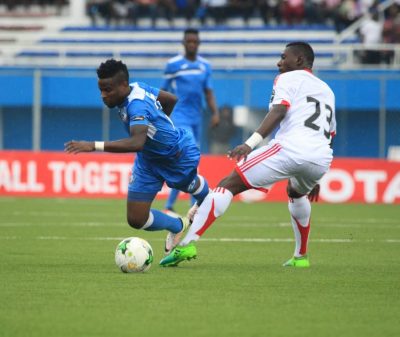 The People’s Elephant finished top of the group with 12 points, three more than second placed CARA. Williamsville of Ivory Coast who were held to a 0-0 draw at home by Djoliba of Mali finished third with eight points.

Enyimba dominated proceedings for majority of the game but were let down by their poor marksmanship.

CARA’s goalkeeper, Chansel Mohikola also made a couple of good saves to deny the hosts.

In the end, it was Alalade who ensure that the Pepole’s Elephant went home with the maximum points after hitting the back of the net deep into stoppage time.