Cameroonians Have Shown That Rivals Can Be Friends, Football Isn’t War It has been more than a week since I returned from Yaounde but I still can’t get past how wrong I was about the people of Cameroon.

To be fair to myself and many other Nigerians, most of our perceptions about Cameroonians were based on the intense football rivalry between the two African football giants.

It didn’t take long for my misconceptions about Cameroon to start ebbing away.

The first incident happened right at the Yaounde-Nsimalen International Airport as I was going through immigration.

For some reason, I expected some hostility and tough questioning and had even got my Group Managing Director, Alhaji Mumini Alao, to sign a letter of introduction with the Complete Communications Limited letterhead. Since Cameroon did not require a visa from Nigerians, I figured they would want to make life difficult. The letter might help.

But the immigration officer was not only warm and welcoming; he even had some banter and taught me some English! 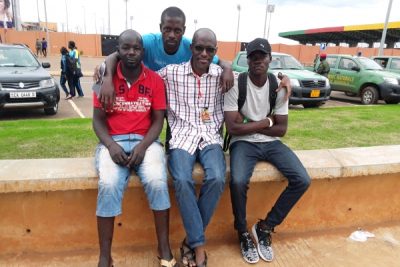 I spent not more than three minutes at the immigration point, more than half of it being taught what ‘forefinger’ meant. The officer was bi-lingual but was obviously stronger in French than English. He asked me to place my ‘forefinger’ in a scanner, which I did. Then he asked if I actually spoke English.

“Of course I do, officer.” Then he indicated ‘four’ by showing up four of his fingers. “Oh, you meant four fingers!” Then I placed my four fingers on the scanner, minus my thumb. The friendly, smiling officer still did not agree that he was wrong, that the absence of an ‘s’ in his instruction caused the initial confusion, even as I tried to explain to him that there was a big difference between ‘forefinger’ and ‘four fingers’.

He waved me on without hassle anyway after stamping my passport, wished me the best and I was finally in Yaounde without any immigration wahala.

The second incident was at my hotel. I had finally arrived at the Phenix Hotel at Titi Garage, less than a kilometre to the Stade Omnisport, well into the night, at around 11.15pm after being taken around looking for good but affordable accommodation. I thought I had my internet sorted and I wanted to put up a report on this website that night.

But it turned out that the Henry guy at the airport put insufficient airtime on my tab, not enough for me to do what I was trying to do. So I got stuck around midnight. I needed internet desperately but I did not have data on my device even after I thought I had bought some from the hustler Henry.

I sought help from the receptionist on duty Armel, who in turn got the chef Francois and a porter, the curiously named Adamu, involved. It is worthy to note that this was now well past midnight and these guys knew I was from Nigeria to ‘spy’ on their team ahead of the 2018 World Cup qualifiers.

Francois explained what I needed to do and how much airtime I had to buy. Adamu went looking for the Orange airtimenine the middle of the night and came back 20 or so minutes later. Francois took my tablet and did his magic. Voila! I could now work. I had enough data to last me till the end of my seven-day stay. These gentlemen did not demand anything extra from me. It was up to me to reward them if I felt like it.

The third, fourth and fifth incidents happened within three hours of each other.

After sorting out my foreign exchange at the Central Market area, quite a distance from the hotel, early in the morning of my first full day in Yaounde I headed to the stadium to see it at close quarters.

It was two days to the Uyo first leg of the double-header and the Indomitable Lions were training behind closed doors when I got to the stadium. Since I wasn’t allowed in to watch the team train, I decided to interview the fans who were discussing football animatedly in French by the main gate.

That was how I met Emmanuel Mougnokong. Lucky me. Emmanuel, a part-time student, who owns a cab and runs a bar, turned out to be my best friend in Yaounde. He doesn’t speak much English, but he speaks enough to make us understand each other and he was a great help throughout my stay.

After he and two other Lions fans spoke about the match on video, Emmanuel volunteered to go with me to FECAFOOT, the Cameroon FA. It was his day off, he said, so he had time to show me around.

I wasn’t sure what I would meet at FECAFOOT given that I was the ‘enemy’ and the body was in a bit of a turmoil with their crisis needing FIFA intervention.

I was pleasantly surprised. I was directed to the Communications Department from the FECAFOOT gate and it was plain sailing from there. 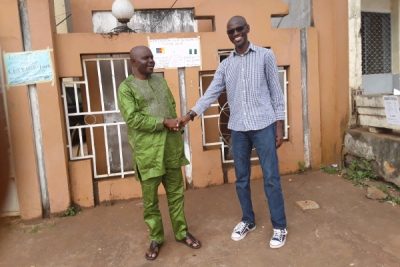 Mr Jean-Jacques Mouandjo, who sat at the biggest desk in the office but insisted he was not the head of the department, was quite warm and welcoming when I introduced myself as a Nigerian journalist in Yaounde to cover the second leg of the double-header as well as the Lions’ preparations.

He did not demand identification, although I showed him our website and told him what every Nigerian sports fan knows: that Complete Sports is the No.1 sports newspaper in Nigeria.

Mouandjo did not only promise me easy accreditation for the match, he was ready to assist with any Nigerian journalist I knew would be coming for the match.

By the time I left the FECAFOOT office, I had interviewed Mouandjo, had a light-hearted bet with the entire Communications department about Nigeria versus Cameroon, and made friends with most of the gentlemen there.

The running theme of most of my conversation with the gentlemen was that there was much more to life than football rivalry. We could be football rivals, but we could also be buddies. Even when I boasted that the Super Eagles would thrash Cameroon in Uyo and Yaounde, and rubbed it in that the Super Falcons defeated the Lionesses to win the Women’s Africa Cup of Nations right there in Yaounde in 2016, none of the guys took offence. Nobody was hostile.

Subsequently, Mr Mouandjo became a rich source of information about the Lions and gave interviews about the matches. He always picked my calls and assisted with information when he could. Perhaps the most gracious thing he did was to call me on the phone moments after Nigeria defeated Cameroon 4-0 in the first leg in Uyo to congratulate me and concede Nigeria’s superiority. 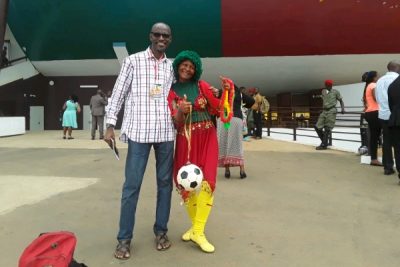 Upon leaving FECAFOOT, Emmanuel and I were looking for a taxi to the stadium when I saw roasted plantain and groundnuts, my favourite snacks. We bought some and I needed somewhere to sit down and wash it down with a soda.

It was at the bar that the fifth incident happened. While I was multitasking: eating, working on my tab and keeping up a conversation with two nice middle-aged Cameroonian ladies who had been to Nigeria and had good things to say, Emmanuel saw his friend walking by, waved him over and introduced us.

Of course I was going to pay for my soft drink and Emmanuel’s beer, and his friend’s beer as he ordered. I was wrong. Emmanuel’s friend Mananga, who is some sort of soldier but was in mufti, ordered for his drink and then left briefly. 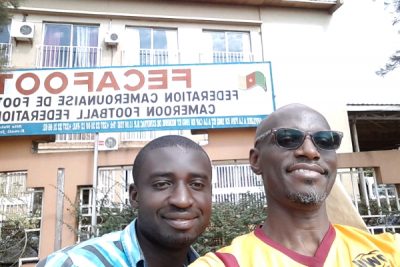 When Mananga returned, he was loaded with some of the tastiest barbequed poulet (chicken) I had ever eaten. He told Emmanuel it was specially because of me, it was his way of welcoming me to Yaounde. I was almost full because of the boli and groundnuts and the 60cl bottle of Coke, but I had to make room for some poulet. Mananga insisted that I must eat and I didn’t need much convincing. It was so good. Mananga, who is an avid football follower and a big fan of the Lions, was convinced I was in Yaounde to spy on his team. But that didn’t stop him from giving me a special welcome.

He also paid for my drink.

There was more. Much more.

There was the Director of Stade Omnisport Ahmadou Ahidjo, Mr Mete Timothy, who I met at the car park for the first time as he was parking. He took me straight to his swank office upstairs and granted me an interview. It was the Saturday after Nigeria’s 4-0 win over Cameroon and he congratulated me warmly. He admitted his disappointment with the result but repeatedly reminded me that the friendly relations between the countries must be preserved.

There were the fans at Emmanuel’s bar in Mvog Ada who started cheering the Eagles at 3-0 in the first match, and heartily congratulated me after the match. Most of the patronsbat the small bar shook my hand. Some hugged me.

There were the sports journalists who jokingly wondered why, as brothers, the Super Eagles should have shown some mercy to the Lions in Uyo, but promised that they would get their own back in Yaounde. Every single one of the journalists was friendly and eager to assist.

There were FECAFOOT’s Valery Gweha, who always smiled and made the accreditation process smooth, and Mona Fongho Patrick, who was extremely helpful on matchday with press conference tickets and other things.

There were the fans who never hesitated to take pictures with me or help me take pictures as soon as I introduced myself as a Nigerian journalist. There was, at any point, never a hint of hostility, before or after both matches.

There were also the fans who showed the Super Eagles love and admiration, struggling to get close to the players, especially Mikel, for pictures and cheering as the team bus arrived and left the stadium.

There was the immigration officer at the airport on my way back who said “congratulations” upon seeing my Nigerian passport and praised the Super Eagles when I told him I was in Yaounde to cover the World Cup qualifier.

My Yaounde experience was in sharp contrast to what I met in Kumasi, Ghana in 2011 when the Nigeria U-23s were pelted with stones and all kinds of missiles as they trained for their All Africa Games qualifier against Ghana U-23s.

That ugly Kumasi experience played on my mind as I left for Yaounde. But, thankfully, I was wrong. 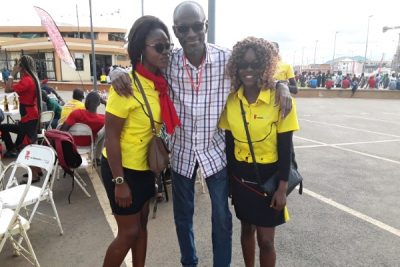 Yaounde fans, journalists, football officials and people generally showed that beyond football, we are indeed brothers.

It will be great for African football if visiting fans, journalists and teams are given warm welcomes and treated with love, dignity and respect.

Hostility does not guarantee victory anyway. It only leads to more hostility.