By Kayode Ogundare who was in Uyo:

When the draws for the 2018 World Cup was made, I remember pundits and analysts dubbed Group B the group of death and literarily advised Nigeria to concentrate more on making the AFCON in 2019, a competition the Super Eagles have failed to qualify for in the last two editions.

This pessimism was not without cause. As at the time of the draws on 24 June 2016, Algeria was the number one team in Africa by FIFA rankings and we all knew how difficult the Indomitable Lions of Cameroon usually are when they come up against Nigeria.

However, after four matchdays, the Super Eagles sit atop the group with 10 points, three more than second-placed Zambia with Algeria and cameroon already eliminated.

The draws pit Nigeria against Cameroon and the Super Eagles were billed to play the Lions twice in four days so everyone thought that was the end of the road for Nigeria’s Russia 2018 dreams.

Surprisingly, Nigeria not only survived the Lions’ den by pulling a 1-1 draw in yaounde, the Eagles stunned Cameroon by inflicting their worst defeat from Nigeria in football history, a 4-0 roasting at the Godswill Akpabio International Stadium.

So, you may ask, how did this ‘miracle’ come about?

As someone who got to Uyo, venue of the match FIVE days befor the game and even before the arrival of the Super Eagles, I consider myself an observer from a vantage point and can relate the five reasons why I think Nigeria prevailed over the Indomitable Lions.

1. Cameroon’s Arrogance: The Indomitable Lions believed the hype of their fans and status as African champions. They flew into Uyo with the kind of hubris that’s disrespectful to any opponent, no matter how low. First, they rejected the Ibom Le Meridien where the Eagles are and where visiting teams are lodged on the flimsy excuse that they needed to avoid Nigeria’s juju. Then they arrived at the pre-match media briefing with shoulders raised rooftop-high and captain Benjamen Moukandjo flatly refusing to talk to the press in English even though he could speak the language. He stuck to French and left the team’s media officer to translate to English for the benefit of Nigerian journalists. 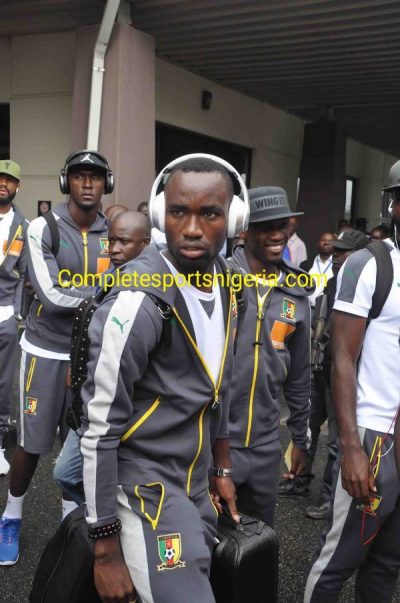 If the fans were boastful, they could be excused but even journalists and administrators that spoke with completesportsnigeria.com both in Uyo and Yaounde prior to the first leg said a win for Cameroon was the only possible outcome of the game.

In the end, they suffered a 4-0 humiliation and left for home with their tails tucked behind their backs.

2. NFF’s Pro-activeness: Often at the recieving end of bashing for not living up to its responsibility but, in this instance, the Nigerian Football Federation deserves to be praised for making it possible for the Super Eagles to train and play in a conducive atmosphere that led to their emphatic victory. 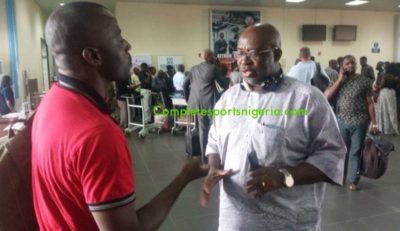 When I ran into Barrister Seyi Akinwunmi, vice President of the NFF at the Uyo airport, he promised that the Federation had done everything possible including booking a chartered flight ahead of the second leg, I thought it was the usual official-speak signifying nothing meaningful but I must admit the NFF actually did a yeo-man’s job.

Of course you’ll be right to say it is their job to do so but when they failed to do it in the past, we criticised them so now that they are doing it we should praise and encourage them to make sure it’s not a one-off.

3. Players Rose Up To The Challenge: I’ve covered the Super Eagles for a number of years but I must admit that the players who came to camp and played against the Indomitable Lions knew they had a point to prove what with the boastful Cameroonians and the loss to South Afica in the last game still hanging on their heads. 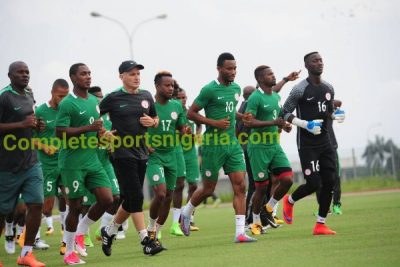 In training and even at the team’s Ibom Le Meridien Hotel, they went about their duties with a quiet determination that I sensed spelt danger for the Lions and I wasn’t surprised they all got high ratings after the game.

4. Gernot Rohr’s maturity: I’m a Gernot Rohr-fanatic. Let’s start from that premise. I’ve been priviledged to observe several Super Eagles manager at close quarters and, while I don’t claim to share any closeness to the Super Eagles Technical Adviser beyond the call of duty, I can say I’ve been fascinated by his calmness, maturity and reasoned responses to any situation no matter how dire they may be. 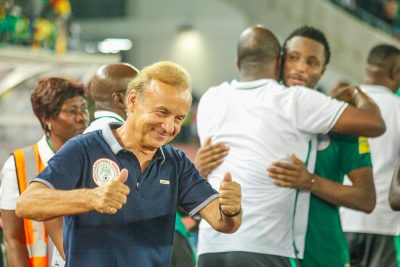 Rohr was the picture of perfect calmness at the press briefing two days to the game and was able to brilliantly conceal any apprehension he might be having from coming to the surface. He smiled genially with the press and assured that he had a game-plan to neutralise the Cameroonians but when pressed for details, he just smiled and asked the journalist to wait for his teamlist.

Going forward, Rorh appears like a man who knows what he’s doing and even though we are going to win some and lose other games, we should give the German a hand to make mistakes, learn from them and give us a Super Eagles we can all be proud of.

5. Mikel’s coming of age, Moses’s fearlessness and Leon Balogun’s outstanding display: Incidentally all three players missed the last game, an home loss against South Africa in June and their performances over the two legs showed why they are the tripod on which the fortunes of the Super Eagles will rest going into the 2018 World Cup.

No wonder coach Rohr couldn’t hide his delight at the return of the trio to his team and he entrusted them with responsibilities to guide the younger players and what a magnificent job they made of it. 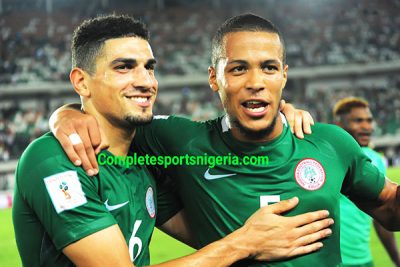 Balogun’s partnership with William Troost-Ekong in central defence reminded fans of the days of the late Stephen Keshi and Uche Okechukwu and later that of Okechukwu and Taribo West. Barring any injuries, Balogun is set to defend the Nigeria colours for long and the Cameroonians will not forget him in a hurry.

Captain Fantastic: Mikel wheels away after scoring the Eagles’ second goal in Uyo

Mikel is getting better with age, just like old wine. He’s really come of age and is now the pivot on which the Super Eagles engine rotates. His absence midway into the second half in Yaounde showed yawning gaps and underlined his continued influence as captain and leader of the team. 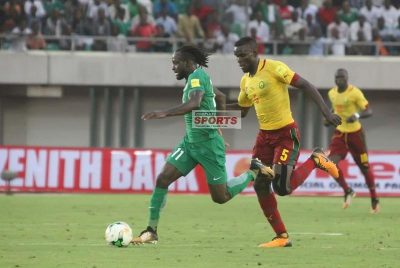 Victor Moses dazzles in Super Eagles Vs Cameroon in Uyo

Moses’ fearlessness and boundless energy is breathtaking. He goes into tackles and makes runs that will bewilder many and his workrate for the Suer Eagles was too much for the Lions to bear. In Uyo and Yaounde, he had a hand in most of the goals scored and is currently the leading scorer for Nigeria with three goals in three games.