Can United Return Nigeria To The Plateau? NO! This article is not about Manchester United of England. It is about Plateau United of Nigeria.

Last Saturday, Plateau United Football Club of Jos emerged champions of the 2017 Nigeria Professional Football League (NPFL) for the first time in their history. The victory didn’t come easy as the Tin City boys were chased all the way until the last day of the 38-week marathon by Mountain of Fire and Miracles (MFM) Football Club of Lagos.

With just one point separating both teams on the league table going into the last games of the season, a win for MFM in their fixture away to El-Kanemi of Maiduguri and a loss for Plateau at home to Enugu Rangers would have handed the title to the MFM Boys. But in the end, it was Plateau that won 2-0 to throw a jam-packed Rwan Pam stadium in Jos into wild jubilation. MFM, meanwhile, lost 2-1 to El-Kanemi to finally settle for second place. 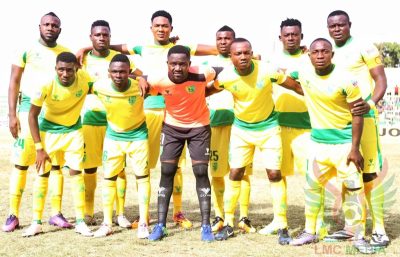 Apart from collecting the highest points total of 66, Plateau also scored the highest number of goals (49), conceded the least (25), had the best goals difference (+24), suffered the fewest losses (10) and were tied with MFM for the greatest number of wins (19). Essentially, they ticked all the statistical columns on the league table in green and were the best team overall. They are indeed worthy champions.

While Plateau coach Kennedy Boboye and his boys have won the right to celebrate a historic triumph, it is pertinent that the club management should start planning immediately for their participation in the CAF Champions League next year.. Nigerian club sides have been languishing miserably at the bottom of the valley of African football since Enyimba of Aba last won the continent’s premier club competition in 2003. The big question is whether Plateau United can live up to their name and return Nigeria to the plateau of African club football.

Sharing that responsibility with Plateau are second-placed MFM whose story is also remarkable. In 2016, MFM escaped relegation from the NPFL by the skin of their teeth when their goalkeeper saved a penalty kick in the final game of the season. One year later, they were contesting gamely for the title which shows how far they’ve come in a short time. Coach Fidelis Ilechukwu may sound boastful in his interviews but he has lived up to his promise to turn the club’s fortunes around if given the freedom to work. I’m sure that Lagos fans cannot wait to watch continental football again next season, having experienced it last during the glory days of Stationery Stores and Julius Berger. 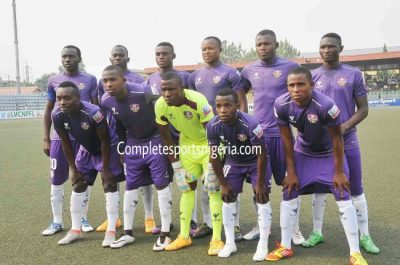 Enyimba, meanwhile, also return to the continent in the second-tier CAF Confederations Cup, after robbing Akwa United of the ticket in the penultimate week of the season. What a close miss for Akwa chairman Paul Bassey.

While the top three clubs in the NPFL can look back on a satisfying season, it’s a gnashing of teeth for my beloved Shooting Stars (3SC) who find themselves relegated, yet again, alongside Remo Stars, Gombe United and ABS who all are going back down after just one season in the top flight.

Before the last games kicked off last Saturday, I made what I confessed was a “biased prediction” on Twitter that 3SC would escape relegation by winning their game away to Niger Tornadoes. I knew that their chances were slim, especially when the players went on strike to protest non-payment of their salaries just days to the crucial game. The strike was later called off but the damage had been done. Nevertheless, I stuck my head out fanatically for them just to show my love for a club that I have supported from childhood. Unsurprisingly, they lost 2-0 in Minna and they will have to play in the Nigeria Nationwide League (NNL) next season.

A close look at the final league table reveals a very hard fought contest. The gap between champions Plateau and fourth placed Akwa United was only six points. Only one point separated MFM (62 points) from Enyimba (61) while Akwa (60) were only a further point adrift.

At mid-table, it was a bumper-to-bumper affair as five teams (Lobi Stars, Kano Pillars, FC IfeanyiUbah, Sunshine Stars and Tornadoes) finished on 54 points, three (Abia Warriors, Enugu Rangers and Wikki Tourists) finished on 53 while two (Rivers United and Katsina United) finished on 52. Relegated 3SC had 50 points, which means just one more win could have catapulted them to as high as a 12th place finish on the log.

On face value, the close race suggests a League that is vibrant, but insiders and the participants themselves know that there’s more to this “vibrancy.” The key factor appears to be some crooked referees who continue to manipulate the results of matches in favour of home teams. And because all (or, at least, the majority) of the club sides benefit from this unwholesome act in their home games, the rogue referees simply sit in the middle and rob away clubs in turns.

Remo Stars may have finished bottom of the log deservedly, but I hear that their case was worsened by the proprietor’s refusal to ask referees for favours during their home games. Not surprisingly, the club suffered the highest number of home defeats in the just concluded season.

Thanks to the League Management Committee (LMC) led by Mallam Shehu Dikko, the NPFL has continued to improve in crowd attendance, television coverage (despite a mid-season dispute with DSTV SuperSport), international partnerships and overall brand image. But dubious officiating by corrupt and incompetent referees will continue to rubbish all these gains if something drastic is not done about it. Stakeholders in Nigerian football must call out Nigeria Referees Association (NRA) boss Tade Azeez to answer serious questions about the credibility of his association. 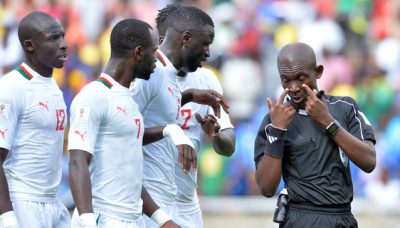 The referees don’t operate in isolation, however. Club administrators and coaches should stop pretending that they don’t know what is going on as the majority of them are complicit. They are the ones giving bribes to the referees to manufacture penalty kicks for them when playing at home, a winning goal is not forthcoming and time is running out. They only cry blue murder when they suffer similar treatment at away games. If the club managers can resolve genuinely among themselves to stamp out the scourge, they can do it. Then, it would be easier to spot the black sheep among them and sanction them accordingly.

The expulsion and life ban imposed on Ghanaian referee Joseph Lamptey by FIFA over a match-fixing allegation is still fresh in the news even as I write this. South Africa who were the innocent beneficiaries of Lamptey’s manipulation have only recently agreed to replay the 2018 World Cup qualifier against Senegal who had petitioned FIFA in the first place after Lamptey awarded against them a penalty kick that did not exist. That episode must have alerted other rogue referees around the world that their days are numbered.

The Nigeria Football Federation (NFF) who appoint referees for the NPFL should take a cue and send out a similarly strong message to the NRA. Tade Azeez and his men (and women) should be told in very clear terms that the NFF is willing to impose life bans on corrupt referees who are intent on sabotaging the football league and this should be inserted in the rule books. Azeez equally should show a commitment to fishing out the bad eggs that are giving the NRA a bad name, and stop exposing referees who do their jobs professionally to our collective condemnation. Enough is enough! 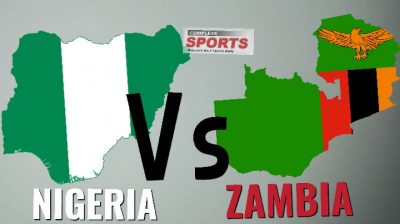 NIGERIA VS ZAMBIA: NO HEAD-TO-HEAD HEADACHE!

DESPITE my explanation last week, I have noticed from feedback that lots of readers still do not understand the minimum requirement for Nigeria to qualify for the 2018 FIFA World Cup finals. Most people are relying on the head-to-head rule to conclude with finality that a draw in our next game against Zambia would be enough to qualify just because we had previously beaten them 2-1 away in Ndola. This is not so.

CAF Qualification: 3rd Round: Group B 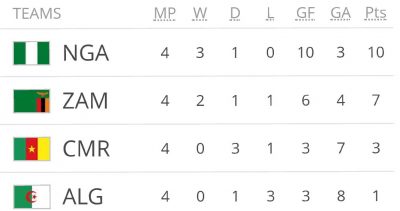 Looking at the group table as things stands now, Nigeria is well positioned to qualify either on points, or on goals difference or on number of goals scored, the goals count coming into play in the event that Nigeria somehow finish on the same points total as Zambia. Therefore, it’s unlikely (although not impossible) that the group will ever be decided on the head-to-head stats.

If Nigeria wins in Uyo as expected on 7 October, they qualify automatically with unassailable 13 points. But should Zambia win or draw the match, then both teams will take the contest to the final match day in November when Nigeria visit Algeria and Zambia host Cameroun.

Obviously, I’m tipping the Eagles to end all these discussions with a clear victory over Zambia on 7 October. As we can see, these head-to-head permutations bring a lot of headache!