Derby County manager, Frank Lampard, said he was shell-shocked after his side knocked Manchester United out of the Carabao Cup on penalties on Tuesday night.

Scott Carson saved from Phil Jones to earn the Championship side a place in the fourth round, progressing 8-7 at the end of a high-class shoot-out that followed a dramatic 2-2 draw at Old Trafford.

Lampard, in his first season as a manager, triumphed against former boss Jose Mourinho despite Marouane Fellaini’s late headed equaliser.

And Lampard could hardly believe Derby, who trailed thanks to Juan Mata’s third-minute goal, were able to dump United out.

“To go down early at Old Trafford and play as well as they did was superb. We had the personality to take penalties and play the way we did. I am a proud manager. 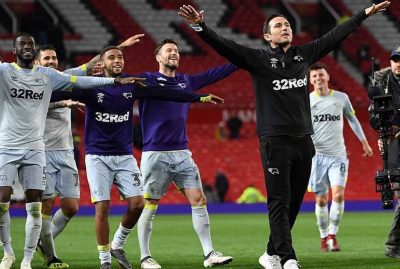 “It was the easiest selection I have had, the players were superb against Brentford [in Saturday’s 3-1 Championship win] and they deserved the chance to play at Old Trafford.

“I wanted to bring a team who could really compete. I am so proud of them. I am trying to build a group to be successful and nights like this are incredible. To go against world-class players and play that way, it’s right up there.”

Derby came from behind to lead thanks to a brilliant long-range free-kick from Liverpool loanee Harry Wilson, with Jack Marriott nodding the Rams ahead.