By Adeboye Amosu:
Super Eagles forward, Kelechi Iheanacho, was the hero as he converted the final spot-kick to hand Leicester City a 3-1 penalty shoot-out win against Wolverhampton Wanderers in the Third Round of their Carabao Cup quarter-final clash at the Molineux Stadium on Tuesday night, reports Completesportsnigeria.com.

Both sides battled to a 0-0 draw after 90 minutes of thrilling football action. 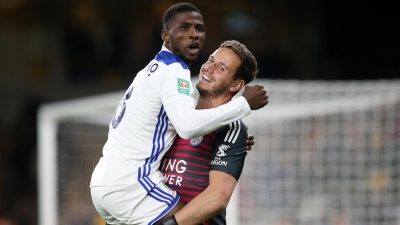 Iheanacho who came in as a 61st minute replacement for Jamie Vardy netted the decisive spot kick to help the Foxes secure a place in the fourth round after two of his teammates hit the back of the net, while the hosts scored once.

Championship side, Derby County recorded the biggest upset of the night by edging out 10-man Manchester United 8-7 on penalties at the Old Trafford. The game ended in a 2-2 draw after regulation time.

United opened scoring in the 3rd minute through Juan Mata, while Harry Wilson equalised for Derby County from a free-kick on the hour mark.

The hosts goalkeeper, Sergio Romero was sent off in the 67th minute for handling the ball outside of the box as he tried to stop Wilson.

Jack Marriott put Derby County ahead for the first time in the game five minutes from the end but Marouane Fellaini ensured the game went into penalty by grabbing a late equaliser for United.

Phil Jones was the villain as his penalty was saved by Scott Carson.