Cavani Fires Uruguay Past Portugal Into Quarter-Finals As Ronaldo Struggles Edinson Cavani struck twice as Uruguay edged out Portugal 2-1 in their Russia 2018 FIFA World Cup second round fixture at the Fisht Olympic Stadium, Sochi on Saturday.

The South Americans will face France who defeated Argentina 4-3 earlier in the day in the last eight.

Cavani opened scoring in the seventh minute from a sublime header, following a cross from the left by Luiz Suarez.

Portugal rallied back after the break with Pepe sending a powerful header into the net in the 55th minute for the equaliser.

It was the first goal Uruguay will be conceding in the competition.

Cavani netted the winner in the 62nd minute with a stunning effort from inside the box which sailed into the net beyond Rui Patricio.

Like his arch-rival Lionel Messi earlier in the day, Portugal captain Cristiano Ronaldo struggled during the game and could not help his side advance. 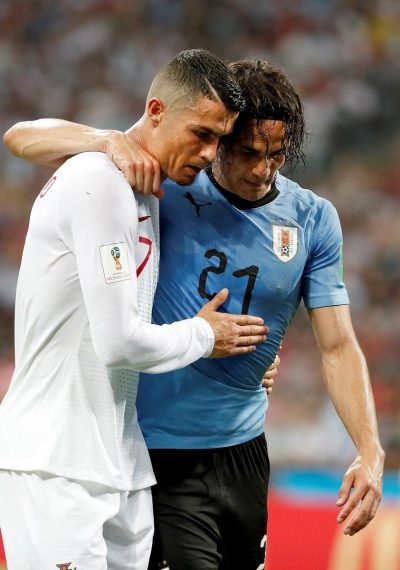