Wolves came into the game in search for their first win of the campaign after picking one point from their opening two games of the season but their supporters will be encouraged by their battling display against their highly rated opponent.

The home team took the lead in the 55th minute with Willy Boly scrambling the ball home.

Manchester City levelled things up in the 69th minute after Aymeric Laporte nodded the ball home from Illkay Gundogan free-kick.

It was Laporte’s first goal for the Citizens since his arrival from Spanish club, Athletic Bilbao.

Pep Guardiola’s men came close to getting the winner a number of times but were denied by brave goalkeeping bpy Rui Patricio. 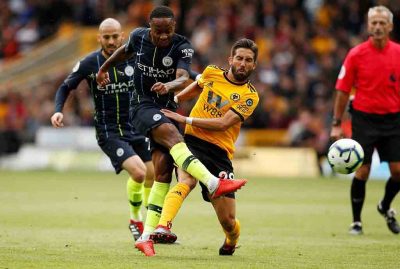 Sergio Aguero came close grabbing the winning goal late on but his effort hit the woodwork.