United delayed City’s coronation as league champions when they came from two-goal down to win 3-2 at the Etihad Stadium last weekend.

But Jay Rodriguez’s second-half goal on Sunday helped City secure the title they last won in 2014.

United remain second on 71 points, just a point ahead of third-placed Liverpool in the league table.

Despite the win, West Brom remain bottom on 24 points with four games left to play.

In the 12th minute, West Brom almost took a shock lead but David De Gea got down well to palm away Jake Livermore’s low strike inside the box. 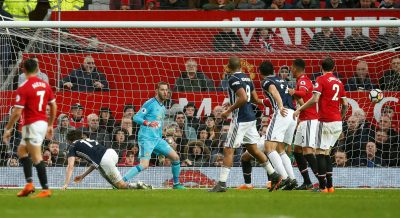 United had a shout for a penalty on 19 minutes after Ander Herrera was brought down only for the referee to wave play on.

United made a change before the start of the second half with Jesse Lingard replacing Herrera.

Lingard almost made an immediate impact after coming on only to see his shot blocked by the West Brom back line.

In the 66th minute Foster produced a brilliant save as he parried away Romelu Lukaku’s goal bound header off Nemanja Matic cross.

West Brom took the lead against the run of play on 73 minutes as Rodriguez headed in past De Gea from a corner which came off Matic.

Chris Smalling almost grabbed an equaliser for United in two minutes of added time but his header was held by Foster.