The game was Chukwueze’s third in the La Liga this season.

Gerard Moreno shot the hosts, Villarreal, into the lead in the 52nd minute before the Nigerian international, Chukwueze doubled the lead two minutes later.

Giovani Lo Celso reduced the deficit in the additional time with a stunning strike.

Chukwueze scored his first La Liga goal on the 11th of November, 2018 for Villarreal in their 2-2 draw with Rayo Vallecano and made his international debut for the Super Eagles nine days later against Uganda.

Villarreal moved up to 16th in the Spanish La Liga log with 14 points from 13 games.

In Belgium, Victor Osimhen came off the substitute’s bench to score his sixth league goal of the season for Sporting Charleroi who defeated Lokeren 4-2 in a six-goal thriller on Sunday. 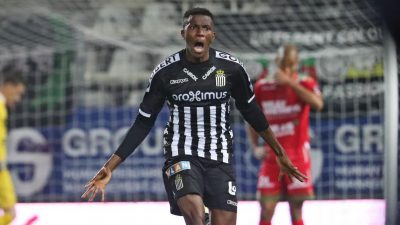 Anderson Esiti made his ninth league appearance (fifth league start) for Gent who were held to a goalless draw at home to Royal Antwerp.

His compatriot, Taiwo Awoniyi was subbed on for Jonathan David in the 55th minute of the encounter for his 12th game of the season. Awoniyi is yet to score a league goal this season for Gent.

In the German Bundesliga 2, Jamilu Collins featured for all 90 minutes as SC Paderborn 07 hammered 1. FC Heidenheim 1846 5-1 away from home on Sunday.

The game was Collins 14th league start of the season.

SC Paderborn 07 are now seventh in the German Bundesliga 2 table with 21 points from 14 games three points off the promotion play-off spot.

Ezekiel Henty played for 45 minutes for Osijek who forced Lokomotiva Zagreb to a 2-2 draw away. It was his 10th appearance in the Croatian League. Henty has scored three goals so far this season. He was replaced by Danijel Loncar.

In Turkey, Ogenyi Onazi and Anthony Nwakaeme started for Trabzonspor in their 2-1 home win over Fenerbahce.