Former West Ham man Jack Collison has urged patience as Declan Rice ponders his international future. The versatile academy graduate has made three appearances for the Republic of Ireland, but all have come in friendly matches.

It means he is still eligible to play for England, having been born in London, and Republic boss Martin O’Neill revealed earlier this week that the Three Lions have approached the 19-year-old. 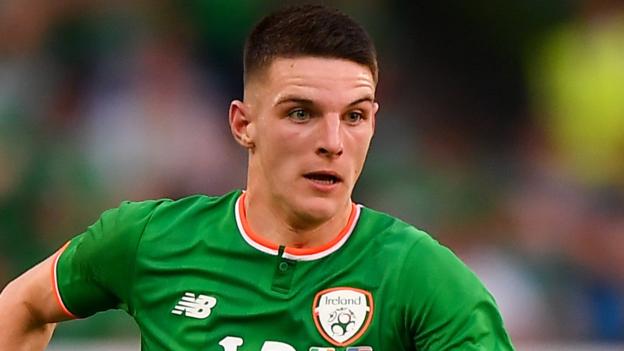 Rice was excluded from O’Neill’s squad for the ongoing internationals to give him time to ponder the decision and he appears under scrutiny to make a call.

Speaking to Sky Sports, Collison, who currently coaches the Hammers’ Under-16s, says it is unfair to put pressure on the youngster and insists he deserves time to make up his own mind.

“It’s a huge decision for the young lad, he’s still 19-years-old, obviously it’s great for him to make his international debut and seeing him when he came back afterwards he was beaming with pride,” Collison told The Debate. “Now you come back and he’s obviously had a phone call, maybe from (Gareth) Southgate or somebody in the England camp and it’s probably thrown a bit of turmoil his way.

“Look it’s a big decision and I just hope at the end of the day it’s not people on the outside getting into him and it’s his decision and what he wants to do because he’s got a great opportunity to go both ways with it.

“He’s a talented lad, he’s a real down to earth lad who is going to work hard and have a good career in football and I just hope he makes the decision that’s right for him.”