In a 15-man competing field, Anyalewechi lifted 324kg which unfortunately was not enough to see him get a podium finish.

India’s Venkat Rahul Ragala won the gold medal after a lift of 338kg.

Don Opeloge from the tiny nation of Samoa won the silver medal with an effort of 331, while Muhamad Fazrul Azrie Mohdad with a lift of 324kg, got the bronze.

In the opening day of events on Thursday, Favour Agboro (men 62 kg) and Monico Uweh (women 48kg), failed to win a medal in their weightlifting categories.

Meanwhile, Sikiru Ojo is the latest Nigerian male boxer to be sent packing at this year’s Commonwealth Games in Gold Coast, Australia after losing to Ghana’s Samuel Yaw Addo in the round of 16 in the bantamweight category on Saturday. 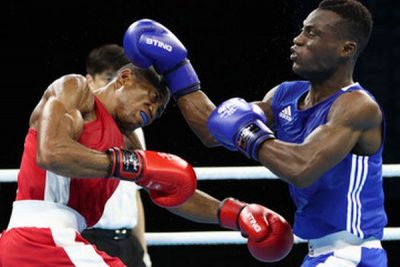 Adeola Soyoye (lightweight) and Osita Umeh (welterweight) had earlier been knocked out in the men’s boxing event.

After being second best in all three rounds, Ojo lost to Addo on a 4-1 decision result.

Meanwhile, the only Nigerian boxer who has advanced into the next round (quarter-finals) is Milicent Agboegbulem in the women’s middleweight.

Agboegbulem outclassed Tonga’s Salote Huni on Friday with a 5-0 score decision and will meet Kenya’s Elizabeth Andiego in the quarter-finals.